There's no shame in little or slow

Today's culture seems to only value big successes. But little successes have a lot to recommend them too: The luxury of atypical success

Another nice summary of why you should be posting at your own domain and not a parasite like Medium: Autonomy Online: A Case For The IndieWeb — Smashing Magazine

Our first encounter with the future, on this very strange day, occurred in the Assistens Cemetery (c1760). We were playing the fabulous Shadow's Notebook puzzle walk and it led us to the grave of Andreas Morgenrødt. According to local lore Andreas made at least four trips back in time and eventually perished in a forward jump, in 2064, as noted on his tombstone. Or, at least that's what I think the story is, as the scant info findable online is in Danish.

That evening, at Tivoli Gardens, we encountered a tightly packed array of wildly spinning and tumbling time machines. Every one had a bright red LED display that indicated the relative year for each pilot. Above the carriages, a giant mechanical clock ticked backwards at a steady cadence. 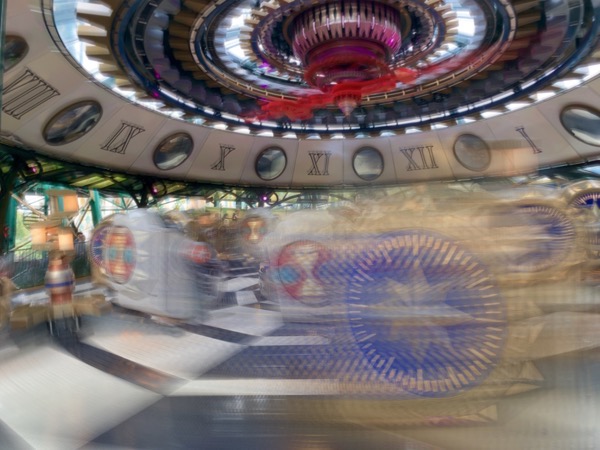 Tivoli Gardens (c1843) is said to be the inspiration for Disneyland. That may not be verifiable, but it is easily believable, as the attention to detail and whimsy is apparent at every turn. Also notable is the tenor of the rides — they operate at speeds and heights that no lawyer would ever allow in the US. 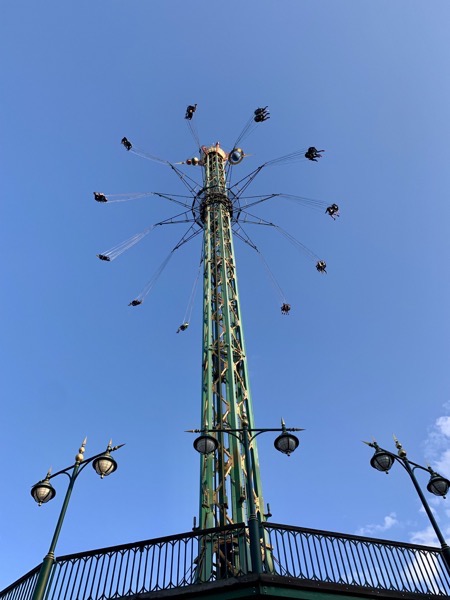 Our third and final time-shift of the day happened in Tivoli’s homage to Danish back alleys. There we ordered two delicious “toasties” for dinner. It wasn't until after finishing our sandwiches that we noticed this, below the cash register: 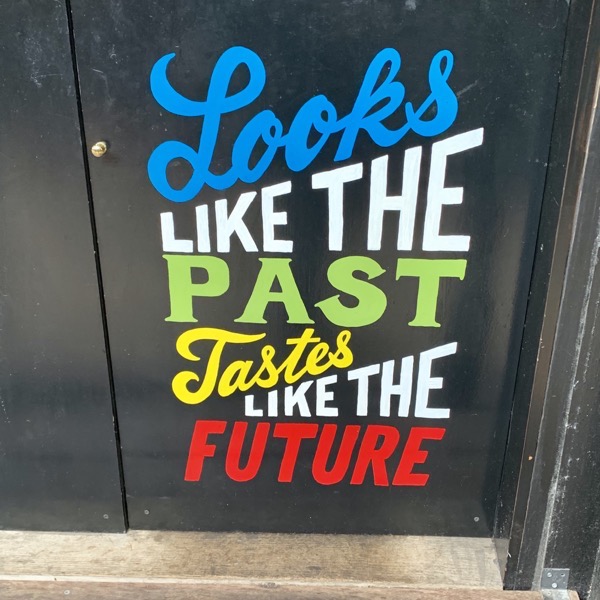 Not entirely sure of its meaning, we took it as a sign to bring our day to a close.

Postscript: After telling the above story to our friend George (Hi George!) he correctly prognosticated that our time travel would continue the next day with a visit to the 1970s at Christiana — the autonomous commune/utopia within Copenhagen. Groovy, man.

A true story from Wales

In the ruins of the old Roman fort called Caer Gybi stands the 13th century Saint Cybi’s Church. A sundial on the face of the chapel is inscribed in Latin, “Life though long it stay will end in night and day.” (Thank you, Wikipedia.) As we explore the medieval grounds a middle-aged Welsh couple approaches and the man warmly asks “Are you locals?”

The woman’s name is Ann, we learn. The man’s name will remain a mystery, after two repetitions and my unsuccessful attempts to say it back he kindly lied “Yes, you got it!”

We continued to chat, with a few more linguistic puzzles being brought forth, then Man offered us a religious tract. “We are Christians,” he said, then clarified when asked, that they are not members of the church where our impromptu meeting was occurring. 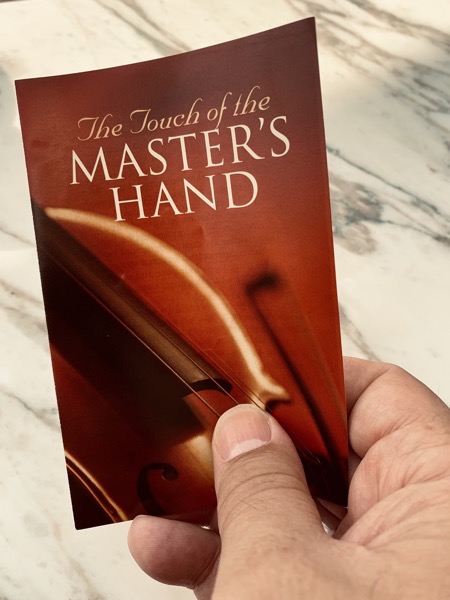 I immediately remembered the Hare Krishna we met on Portobello Road and offered one of our Bucktown buttons (“badges,” they call them here) in exchange. This time, it was accepted.

Later, in the town of Holyhead, we see Man and Ann across the street. We exchange waved hellos.

The robed Hara Krishna follower approached me with an outstretched hand holding some sort of sticker. “Gift. Gift.” He said, gesturing with whatever it was.

I reached into my right pocket and his eyes crinkled with a smile. I extended my hand, offering him a “Bucktown” neighborhood button that we commissioned for our trip. 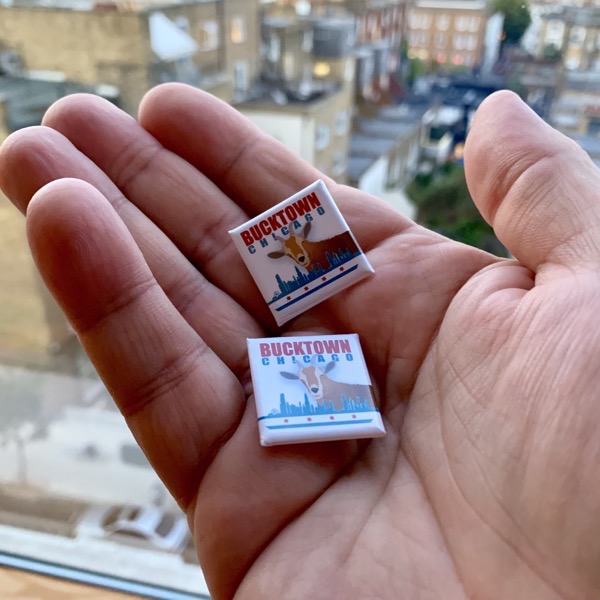 “No. No.” Shaking his head he thumbed the edge of his robe to indicate he wouldn’t, or couldn’t, pin a button on the saffron garment.

I extended my hand again, asking him to accept it anyway. He turned and briskly walked away saying “No. No. No. No. No.”

Our Will o’ The Wisp

Gale noticed it first, a strange ball of light dancing high in our living room. I immediately recognized it as as a legendary Will o’ The Wisp and grabbed the closest camera. (Which, thanks to a quarantine cleaning binge, was our old camcorder.) 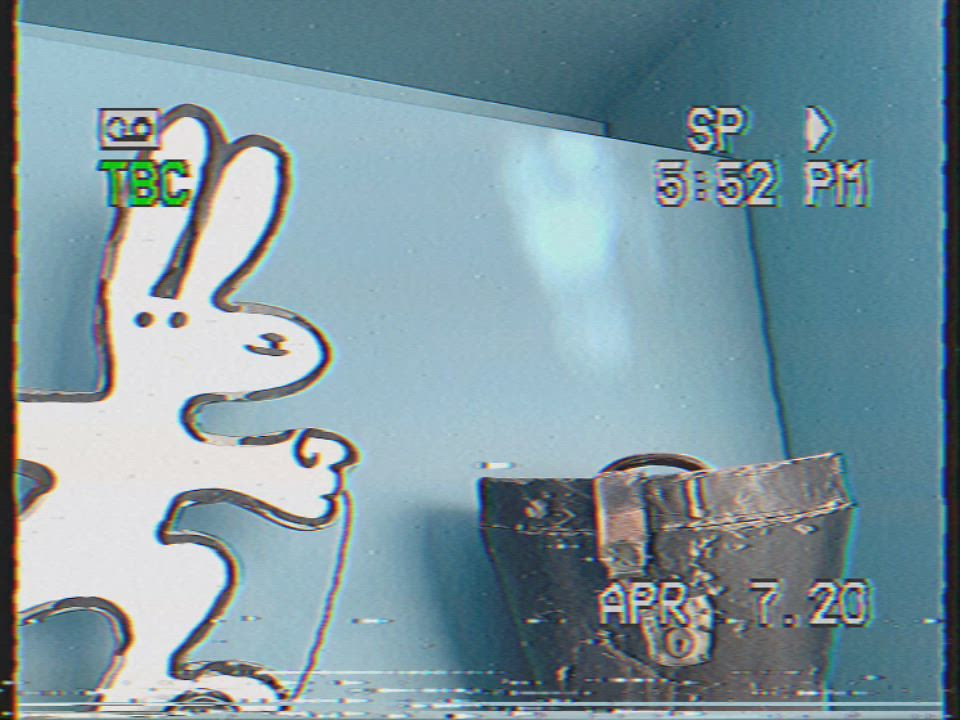 Admittedly these apparitions — sometimes also called “spunkies” — are more typically seen outdoors. They are also known to lead humans to danger. In this manner, this one was true to its reputation, as it was a remarkably lovely day in Chicago and it was very tempting to defy the Governor’s “stay at home” order and venture outside. Fortunately, the Wisp vanished before tempting us further.

We remain alert in case it decides to return.

Posted at 11:53 AM in Religion, Truth in Imaginary Circumstances | Permalink | Comments (0)

Be the Internet you want to see

Don’t like what the Internet has become? You Choose

Posted at 04:18 AM in Consuming, Religion, Technology | Permalink | Comments (0)

Thanks for reading my site, by the way. If you find it quaint that I have it, check out this article.

Why is it so hard to create a will?

It is surprisingly hard to find an attorney to help you create a Last Will and Testament. I have contacted many in the Chicago area -- even using referral services provided by my employer -- and none of them are interested in the job. They all want to set up a Trust, which I do not want nor need. It's no surprise that the legal profession has such a slimy reputation given that there's no interest in doing such a simple job.

I finally resorted to buying Quicken WillMaker from Nolo Press. Now I've good experience with Nolo's publications, but this app is a buggy piece of crap. It's also so utterly simplistic that you're better off just using Google to figure out how to create your own Will. (And then hope it works out when you're dead. Which I guess ultimately is how they all work anyway.)

I have to call bullshit on this article from The Guardian titled "Why I hate Las Vegas."

When I checked into my hotel on that four miles of monstrosity known as the Strip, I was handed a key card adorned with a photograph of a pouting bikini-clad woman, with a telephone number underneath, urging me to call if I wanted to “party”. In my room I found several leaflets telling me I could order a “girl” to my room to keep me company.

I find it extremely hard to believe that any hotel in Las Vegas, especially a hotel on the Strip, has escort ads on their room keycards, let alone flyers in their rooms. But maybe the reporter stayed at one of those sketchy motels down by the Stratosphere. They're still "on the Strip," but not in the way most people use that phrase.

Later, however, the reporter also offers this observation:

There was an actual McDonald’s in the actual hotel, and the queue for it was massive. I did not have to eat there, of course, as I had other choices. There were three Starbucks, one Fatburger and a Dunkin’ Donuts.

Aha! A hotel with a McDonald's! That certainly narrows down the field as to where the reporter stayed. According to the McDonald's website, there are only two locations inside casinos: Circus-Circus, and the Stratosphere.

We can reasonably rule that Circus-Circus does not have escort ads on their room keys. Not only is it a famously "family-friendly" place, it's owned by mega corporation MGM Resorts International, who's legions of attorneys, at the very least, would never allow that to happen.

That leaves The Stratosphere as the only candidate. However, notice that the reporter said the hotel also had Starbucks, Fatburger, and Dunkin Donuts.

I don't have all day, so I'm going to ignore the Starbucks. Hell, three locations in one hotel seems like it might be an under exaggeration if anything. But Fatburger is a small chain so it's easy to fact check. Guess what? According to the restaurant's website, there are no Fatburger locations inside a hotel or casino in Las Vegas. There is one on the Strip, but it is a standalone location, miles away from the Stratosphere.

Additionally, there are only three Dunkin' Donut locations in Las Vegas. None of which are in hotels or casinos.

So, while the author is certainly welcome to dislike Las Vegas (which I consider a personality flaw), her hit piece trashing it should not be taken literally as it's clearly confabulated. Unless someone can show me a room key from the Stratosphere with a picture of a hooker on it, of course.