If you have a Nespresso Espresso Maker by KitchenAid (Model KES0503SZ) then you have likely discovered a minor flaw. Namely, the design of the water tank can make it difficult to see how much water is in its tank.

If you’re experiencing this issue, here’s a simple fix. Drop a cork from a wine bottle inside the tank. It’s easy to spot from the outside and you’ll know exactly how much water is present before you push the brew button. 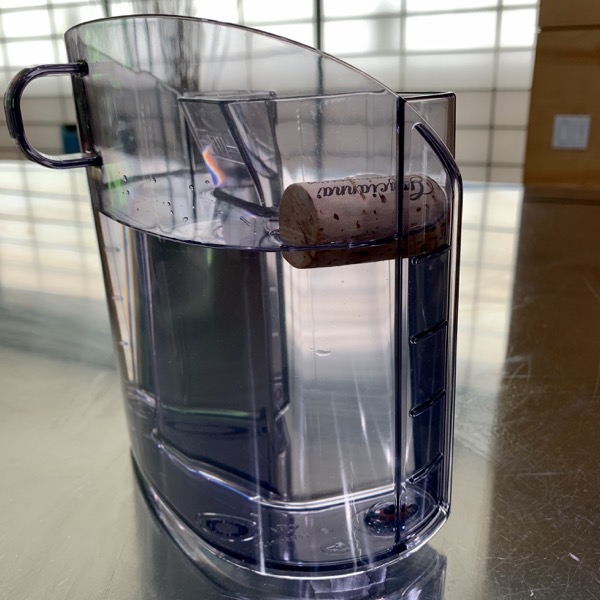 Aside from this hiccup, I rather like this coffee maker. It’s sturdy, cosmetically matches my other KitchenAid appliances and (most importantly) offers a size setting that is larger than the Lungo that other Nespresso machines have.

If you're a Mac OS X (macOS) power user, you should certainly have a copy of Keyboard Maestro. (If you don't stop reading now and go there. You're welcome.) This tiny little trick requires that you have it...

My HP LaserJet printer is not on the same floor as my home office. Therefore, whenever I print something, I like to keep tabs on the print job so I know when it's finished or has encountered problems. Normally, to do this, you have to click the printer's icon in the Dock.

I hate clicking things when I don't have to.

So I wrote what might be the world's simplest macro. It's triggered by the print job starting, then it clicks the monitor apps which causes the status window to open. Brilliant? Not really, but it is very handy. Here's what it looks like: 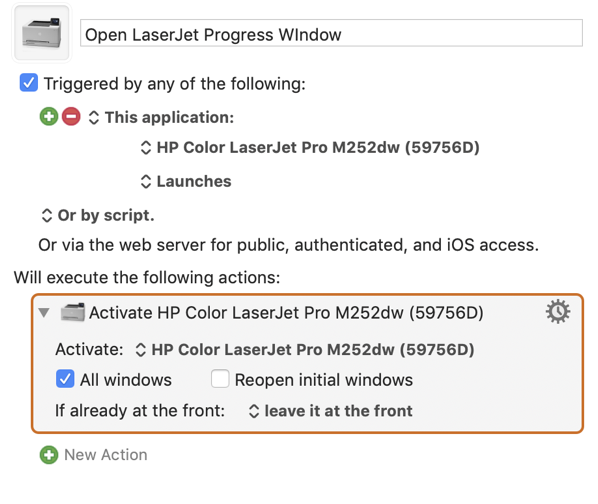 Just filing this away here... a nice homemade bracket that adapts a door sensor to a garage door in a very clever way.

Cure for a SwitchBot that forgets its schedule

Currently, one of the best home automation devices in my system is the "SwitchBot Button Presser." It looks a lot like a Rube Goldberg device, but it works perfectly for activating non-smart switches. If you're looking to retrofit an existing setup, give it serious consideration. (But be aware, it makes a distinct mechanical noise when operating.) I use them to schedule hallway lights, and I love that they operate independently and reliably.

One of my SwitchBots, however, recently started forgetting its scheduled on and off times. I chalked it up to a glitch or a firmware update, then finally realized that its battery was low. The switch would still operate and communicate, but for some reason, wouldn't save its scheduling. A fresh CR2 battery solved that problem. (And underlined that it's a good idea to keep spares of uncommon batteries.)

When nerdy interests intersect: Discovered that a Poker-sized card box is a suitable case for a Beaglebone Black microcontroller.

The Koogeek "smart" power strip is a nice HomeKit accessory, but it appears to be discontinued. If you need to change its wi-fi setting, good luck. The user manual is 404 on the company's website.

After much gnashing of teeth, here's the secret:

1. Before we begin, remove the accessory from your home using the Home app, Holmes.
2. Hold down the on/off switch for Outlet #1 for 10ish seconds, until all the other lights go off and the light for Outlet #1 flashes slowly (mine is green)

Then you can use the Home app to add it to your HomeKit network.

Hint: Outlet #1 is closest to the power cord.

If you're pulling your hair out over an HP printer that stopped being reachable/visible after you made a network topology change (such as a new router), reset the printer to factory settings and reconfigure it. Some HP models (all?) retain the MAC addresses of network peers. Trust me, it's worth the effort.

Know when Alexa is listening

The news is filled with stories about the Amazon Echo devices are spying on you. Well, that's overstated and ill-defined. (You've consented, so technically it's not "spying'.)

The Echo devices do indeed record what's going on in your room. They are constantly listening for the "wake word" that activates their processing. Unless you've changed it, the wake word is "Alexa." Determining if "Alexa" has been spoken takes place locally, on the device, so your recordings aren't constantly leaking out of your home.

But, if the device determines that you did say "Alexa" (even incorrectly) the recording of what you said after is sent to Amazon's servers for analysis. You didn't really think your $49 plastic computer was doing all the processing itself, did you?

In the Alexa app, you can set your Echo devices so that it plays a tone whenever it thinks the wale word has been spoken. This is well worth turning on because you will discover just how often the Echo mishears you. (Spoiler alert: very, very often.) And what you say following that tone is uploaded in a recording to Jeff Bezo's personal email.

Or maybe it's not. The problem with all of this is that Amazon, unlike Apple and even super-creepy Google, hasn't documented what they do with your recordings. You can go into the Alexa app and delete all your recordings (if you're able to figure out how) but there are no assurances that they are truly deleted. It's possible they're are only removed from the list you see. Unless and until Amazon becomes transparent about their practices, all you can do is hope and trust them.

Why does my Raspberry Pi Zero W constantly crash during startup?

It's your power supply. Trust me, it is. Just shut up and try a different one already.

I am selling my cache of INSTEON smart home modules. If you're a home automator using this technology, it's the bargain of the century for spares and expansion. See my eBay listing here.