How to easily turn off annoying Ulysses features

The Ulysses app was once a paragon of minimalist, distraction-free writing. But since they have gone to a subscription model (which I don’t begrudge at all), they apparently feel pressure to regularly add features. Many of these additions have degraded the soul of the app and, frankly, will soon drive me to adopt another application.

The two additions that I find most egregiously annoying are the “Markup Bar,” and the “Counter.” The former displays text-formatting shortcuts, the latter shows word count. Both intrude on the writing space and, here’s the shitty part, can’t be permanently turned off.

I have filed bugs with the company that Counter and Markup Bar default to turned on for new documents, and also any new view of an existing document. These bugs were confirmed by Ulysses Tech Support, but after several new versions of the app, they still have not been fixed. I don’t know what’s going on at Ulysses GmbH & Co., but they have lost sight of their north star.

The only workaround is to use the Keyboard Maestro macro that I’m sharing below. The next time you’re writing in Ulysses and one of these stupid features raises its head, run this macro to immediately turn off both of them again. I’ll keep it updated to disable any new annoyances they add in the future. The best way to configure this macro is to have it active only when Ulysses is front-most. 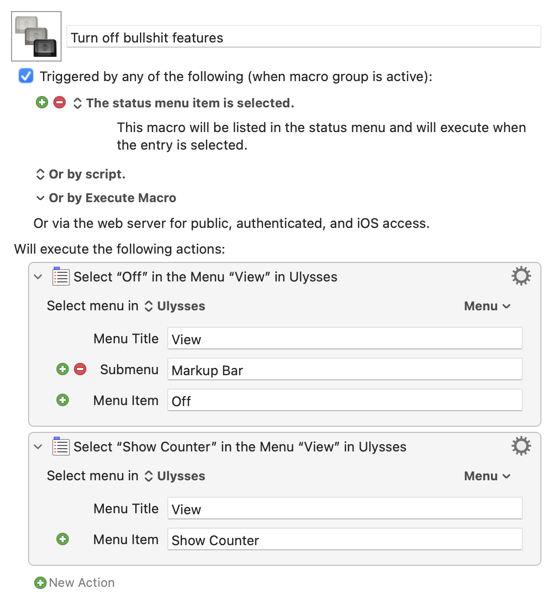