Home Archives Profile Subscribe
Hikers Suspenders are the real deal
Book Review: Enquire Within Upon Everything

Book Review: How to Lie with Maps

I read this book as part of my research for a forthcoming edition of my Bizarre Fact Files series. The book is a well-written, deep exploration into the techniques and politics of cartography. By the time I finished this technical exploration — learning about things I didn’t even know existed — my perspective on mapping was forever changed. 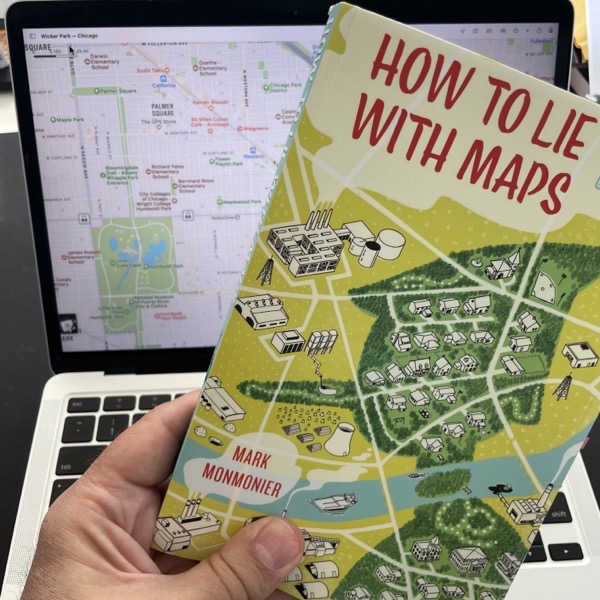 Yes, I said the politics of mapping. As this book makes clear, every map is a political statement. Maps represent reality, but are not of reality. And the power to define reality lies with the person holding the pen.

Although I didn’t see it referred to in the book, I feel obligated to also mention Alfred Korzybski’s meditations that “the map is not the territory.”

One of my favorite chapters, “Data Maps: A thicket of thorny choices” should be required reading for every social scientist, if not citizen voter, for its clear discussion of how aggregation, homogeneity, and other choices make it easy to distort “data.” Keep this in mind the next time you see a purported map of crime levels, real estate values, or other “facts” superimposed on an areal map. (The author’s book Mapping It Out: Expository Cartography for the Humanities and Social Sciences promises even more about this important topic.)

There were numerous tidbits that caught my attention. A few examples:

How to Lie with Maps, published by the venerable University of Chicago Press, is not a casual read. But for an outsider such as myself, it was fascinating and insightful. The author, Mark Monmonier, has several related titles, as well as a rich website that will take you deep into a delightful rabbit hole. To get your copy of this book, try the Amazon.

Imaginary streets are “facts” and can’t be copyrighted‽‽‽

I know, it's so strange. For details see the "legal" section of the Wikipedia entry for Trap Street: https://en.wikipedia.org/wiki/Trap_street