I was faced with an annoying situation that was inconvenient to solve. The problem was an outdoor Ring Stick-Up Cam, which was permanently mounted to a wall, needed to be recharged.

The solar panel that was supposed to keep it charged was poorly positioned and didn’t receive enough daily sunlight to keep the battery topped off. The camera itself, perhaps because it is a first generation model, doesn’t have a “quick release” mount to take it down from the wall. Furthermore, being mounted 10 feet above the ground over some precarious landscaping, makes it tricky to reach the screws that hold it to the wall.

All of this is not a one-time challenge. The camera will need to be recharged regularly unless that solar panel is moved.

My solution? A cellphone battery booster pack. I opted for an Anker Power Bank, which at 20 watts is more powerful than the Ring requires (2 watts) but I thought it might charge the camera more quickly (I was wrong) and be useful in other situations (we’ll see). The Anker unit has a trickle charge option for low-powered devices (which would seem to include the Ring), but I did not use it.

The connection from the Power Bank to the camera is via an extra long cord from IKEA. A great source for low-cost and high-quality cables, as I’ve noted previously. The photo shows the Power Bank resting on a wall box, with the charging cord running up to the Ring Stick-Up camera. The Power Bank is plugged into the camera where the solar panel is normally connected. 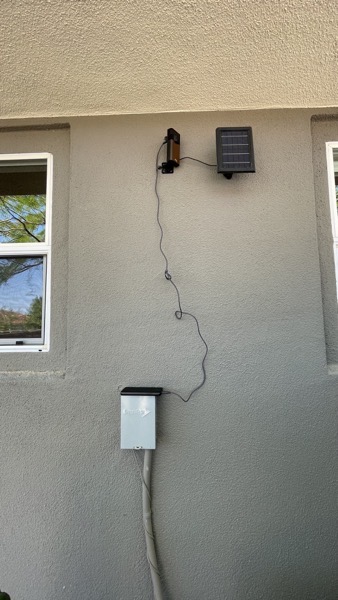 The “device health” display in the Ring app is decidedly not real-time. It displayed 13% battery power when I began charging, and stayed that way for five or six hours, until jumping straight to 100% after letting it charge overnight.

The Ring website wasn’t especially helpful in solving this dilemma. Mostly because they make it very difficult to find support documents for older models. There is no way to filter the results to show only information that is relevant to the product you own.