I haven’t read a horror novel in decades, but the design and premise of this one was irresistible, so I dove right in. The book, written by Grady Hendrix and properly punctuated “Horrorstör,” is about the haunting of a low-rent IKEA knockoff store called “Orsk.” The book’s design resembles an IKEA catalog and even features (increasingly creepy) products with appropriately Swedish-y names. It’s a perfect execution of the concept. 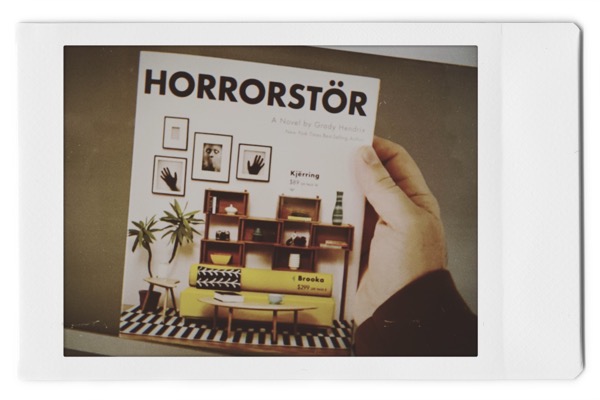 Here is a spoiler-safe example of how nicely the story and setting are interwoven:

(REDACTED) was completely immobilized in a wooden box roughly six feet long, twenty inches wide, so shallow that (PRONOUN) face touched the lid. It had the dimensions of a coffin, but (PRONOUN) knew right away that it was a Liripip, one of the most popular sellers in Wardrobes.

Up to about half-way through the book, the story is a fun, clever, satiric take on what it’s like working in a store like IKEA. There are ghostly vibes present very early, but for me, it was akin to an episode of Scooby-Doo.

After the halfway point, the book takes a dramatic turn towards the dark (literally) and disturbed (also literally). No spoilers, but I ended up regretting my decision to make this my “just before bedtime” nightly read. The book never loses its sense of humor or thematic cleverness, but holy hell, there are some frightening things happening in Orsk after closing!

Several years ago, I spent a summer as the sole occupant of a residence hall at Northern Illinois University. Being the only living person in a large building designed to house hundreds was sometimes quite unsettling. This description from the story really hit home for me:

Orsk was so big it needed a certain number of people on the premises to keep it under control. (NUMBER) of them weren't enough. The store was stirring, restless, growing slowly. Emptied of people, Orsk felt dangerous.

I also enjoyed this perspective about ghosts:

I believe a ghost is a subjective experience. It doesn't have an objective reality. It exists solely in the perceptions of the people who see it.

And finally, I’ve read accounts of 18th century séances and wondered how ectoplasm was perceived, this made me view the phenomenon in a new way:

(REDACTED) throat gave a final heave and what (REDACTED) saw next was impossible: it looked like she was vomiting underwater. A thick, milky liquid hung in front of (REDACTED) face, an impossible cloud suspended in midair, soft white tendrils unfurling in slow motion.

The book’s back-flap author bio indicates that Hendrix is a screenwriter, and even though I’m not a movie kinda guy, it’s easy to imagine this as a film. I hope he’s optioned it for a big pile of cash — it’s a remarkable and memorable work. (Although, I’m hoping to shake some of those memories myself.)

I found my copy on the Fiction table in a suburban Barnes & Noble, but you can get one at the Amazon, of course.

If the Sensus in your Volvo displays a message about updates being available, but then refuses to list any app updates, it’s probably referring to a map update. Don’t bother contacting Volvo OnCall about not seeing any updates, they will just refer you to your dealer. Then, as happened to me, your dealer will tell you that you need a map update. You can have your dealer install it (for a fee), or you can do it yourself. Kudos to Howard Orloff Volvo for pointing this out to me.

Having previously owned a Nissan Murano, I was pleased to learn that Volvo provides free map updates via their website, but not pleased to discover that Volvo’s instructions for installing the updates are poor and incomplete. After several false starts, here’s the information necessary for success, which I discovered by trial and error: