You have most likely heard of the Hardy Boys, but are you familiar with “The Three Investigators?” These teenage friends and their improvised detective work were very much a part of my formative years, so I was happy to discover one of the novels about them at Downtown Book in Milwaukee. 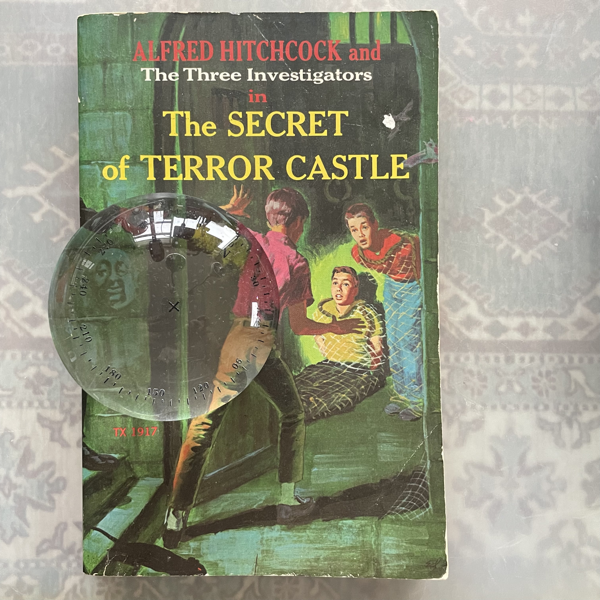 The series consists of dozens of books, of which The Secret of Terror Castle is the first. As such, it’s a great introduction to the boys and their exploits. It was published about the time I was born, so it was a few years later when I discovered the stories, thanks to the wonderful Scholastic Books program at school. (I have a vague memory of donating my copies to my grammar school library when I got older.)

My friend Spencer and I formed our own “detective agency” based on these adventure stories, and we pursued it doggedly by inserting ourselves into petty neighborhood crime investigations. That came to a screeching halt when an actual city detective caught us collecting fingerprints and intimidated us into finding different hobbies.

So, how does a teenage mystery novel hold up in the eyes of a grown man? Pretty good, actually. There’s a strong nostalgia component, of course, but I was surprised at how many of the details I’d forgotten but still enjoyed upon rediscovery. However, I proudly still remembered the solution to the crime in the story.

If you’ve read these in the past, I strongly recommend revisiting the books. They’re great fun. You’ll have to excuse some things — such as the relentless fat-shaming of one of the protagonists, the lack of female characters, and the frequent sidelining of the bookish, and ‘crippled,’ member of the team. But these elements don’t overwhelm the story (although they might help explain the continued marginalization of the series) and the clever, solid mysteries are well worth your time.