Book Review: We Have Always Lived in the Castle

I’ve been hearing about this book for decades. I think the first reference I came across was when I was reading the book club (remember those?) edition of Stephen King’s Danse Macabre. I’ve encountered other references to Shirley Jackson’s work, too — sometimes in discussions about The Twilight Zone — but I’ve never taken the time to seek her novels.

And I still haven’t. I only read this one because it was left at my feet. That is, last October, someone put it in our Little Free Library. It was adorned with an enticing Post-It Note: 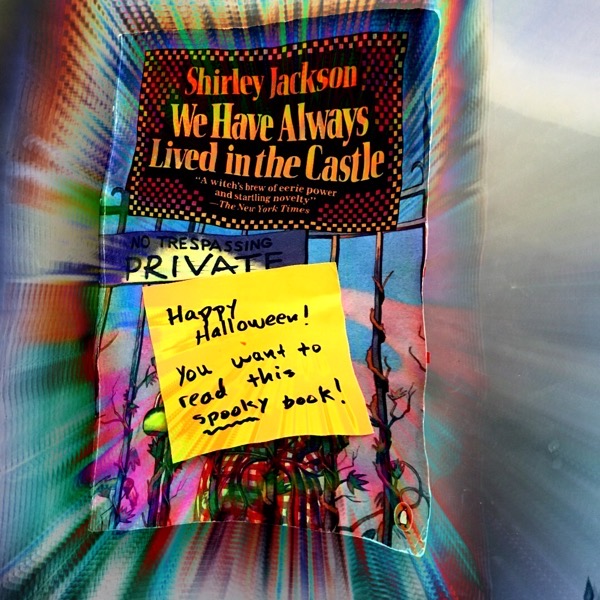 I took this as a sign from a god and added the donated book to the pile of unread books that threatens to overtake my office. A couple of weeks ago, I opened to the first page, and by the end of the second sentence I was hooked:

”My name is Mary Katherine Blackwood. I am eighteen years old, and I live with my sister Constance. I have often thought that with any luck at all I could have been born a werewolf, because the two middle fingers on both of my hands are about the same length, but I have to be content with what I had.”

We Have Always Lived in the Castle is one of the most eerie, compelling, and beautifully written stories I have read. I wish I had done so sooner. As soon as I finished it (no spoilers, but the ending is perfect) I immediately wanted to read it all over again so I could study and admire its construction.

If you read the more studious reviews of the book—of which there are many in the 59 years since its publication—you’ll find heaps of praise and appreciation, but generally very little detail about the story itself. (Still, don’t read them, spoilers suck.) The reason for all their editorial vagueness, including my own, is that trying to convey the atmosphere and feeling that Jackson has created is like describing smoke. You have to experience it for yourself.

Here are some excerpts that stood out for me:

If you’re not lucky enough to receive a copy by divine intervention, you can, of course, buy one at Amazon.

I love your zinger, "If you’re not lucky enough to receive a copy by divine intervention..." In one of my upcoming videos, I review a book without ever mentioning its title, noting how the best books have a knack for finding you on their own. :-)