This is a very unusual book for me. It’s the re-telling of ancient Japanese folk tales using sequential art, and it’s published in the traditional Japanese manner so it’s read “back to front” and “right to left,” compared to other texts. (It took me about 25 pages to get used to this, by the way.)

The stories are illustrated by Shigeru Mizuki, who is apparently a Big F’in Deal in the world of Manga. (I don’t phrase it this way to dismiss him or the claim, but only to highlight the large gap in my knowledge.) The artwork is outstanding, and describing it as “stunning” seems like faint praise. Mizuki also helps bring extra life to the stories by including a few auto-biographical panels that are in reaction to the events being described, which is very charming. 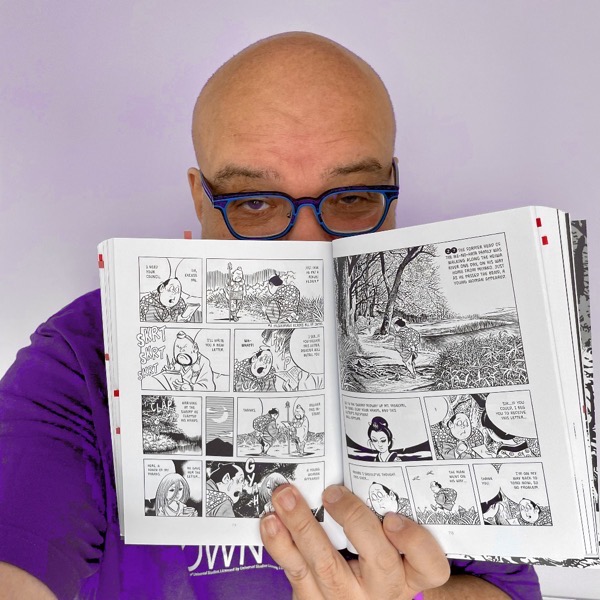 The stories of the Tono Monogatari are essentially the Grimms’ Fairy Tales, of Japan, and in fact, are similarly cataloged and varied. They were documented in 1853 by Kunio Yanagita, a cultural bureaucrat during the period when Japan was opening up to the rest of the world, and its rich and varied regional lore was being rapidly lost or willfully destroyed.

In reading these tales, I felt an immediate affinity for Yanagita, not just for the subject matter, but also for his sparse and first-person writing style. (Apparently known as bungo.)

Of the 119 tales in the book, the ones I enjoyed the most featured fairy-like beings, ghosts, shape-shifting foxes, tricksters, and giants. (The giants are described as humongous creatures who stand more than six feet tall. Who could imagine such a thing‽)

I learned a lot from this book and I greatly enjoyed it. If you’re a fan of lore, incredible ink art, and cultural surprises, I think you’ll like it too. I bought my copy at Quimby’s Books in Chicago, but of course, you can also find it in the Amazon.