The Influencing Machine by Brooke Gladstone

Realistically, what can I add about a NY Times Bestseller that’s written by a beloved NPR host? The book is critically acclaimed across the board, and it came out a few years ago, so there are plenty of reviews already published. 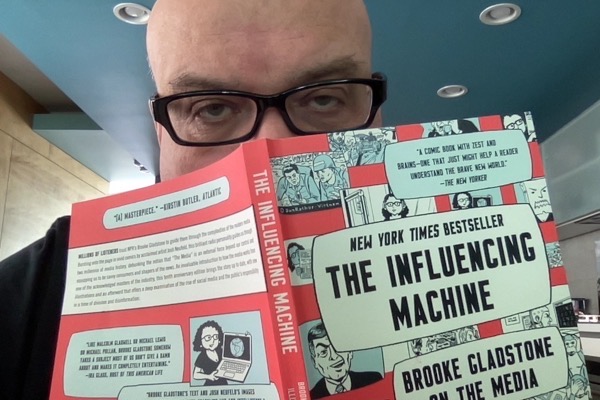 Still with me? Thank you. Once up a time, I was studying broadcast communications, so I had a few media studies classes in college. And, as a sociologist, I was exposed to popular culture research, and I became very familiar with books like The Hidden Persuaders, and of course, the works of Marshall McLuhan. To my way of thinking, this book is in the same general orbit.

If you’re a fan of Scott McCloud, you’ll be tickled pink that this book is a triumph of non-fiction sequential art. I have deep admiration for what Gladstone and illustrator Josh Neufeld have accomplished in this regard. The writing, pacing, artwork and,—well, everything—is perfect. For that reason alone it should be required reading for technical writers and instructional designers in every field.

This is a revised edition of the book with an afterword for the Trumpian world in which we all now suffer. Some of what the book decries is now even worse than when it was originally published, and some of the hopefulness it expresses now seems naive. Adding the new material at the end was a smart move, as it’s impossible to read the book without feeling nostalgic for the pre-Trump and pre-FacebookNation era.

Some of the parts that stood out to me include:

The one bad thing I do have to say about the book is that Gladstone lost me in the final chapter when the story line fractures into a mishmash of bon mots from “visionaries” such as Marshall McLuhan, Ray Kurzweil, and even Douglas Adams. It felt like an attempt to end the book on an optimistic note, but it comes off as Twitter-style exuberance.

I bought my copy at Quimby’s Books in Chicago, but of course, it’s also available at the Amazon.