I open my post office box and on top of the week’s mail is a peach-colored notification slip. For most people, “Oh! I have a package to pick up!” would be a joyful surprise. But those people don’t live in my neighborhood. Here, the thrill of a pick-up is also delivered with no small measure of trepidation. (My local post office was once rated by the Postmaster General as the worst in the country.) 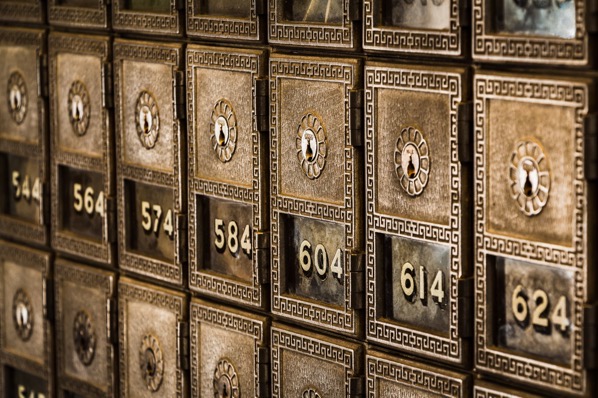 The post office, located on a busy Chicago street, still smells like the shoe store that previously occupied the storefront. I notice when I arrive that there are only five people ahead of me in line, which is pretty much like winning the lottery. The plexiglass plague shields, along with the mandatory face masks, require people to speak loudly, which lets me eavesdrop while I wait for my turn.

A twenty-year-old brunette is at the counter. She asks the clerk “Do I need to put a return address on this package?”

The clerk replies, “Yes, all mail should have a return address.”

“In the upper-left corner, but you wrote the destination address up there, which is going to confuse everyone.” “Here,” she says, handing over a pen, “write your return really small above it.”

“OK, thanks. I thought it might need one, but I didn’t know where it went.”

As this conversation is taking place, another young woman arrives. She’s carrying a shopping bag full of small pre-paid packages. I decide that she’s an Etsy seller, shipping out orders. (She seems crafty.) She begins piling the packages on the far counter, which is the designated spot for dropping off ready-to-go packages, but she has so many that she has to carefully balance them on top of each other. The clerk notices this and yells at her for not asking for a bin to hold the packages. The girl sheepishly takes the bin she’s given and empties the bag, leaving the bin on the counter.

As she’s departing, she passes another woman, who is entering. This new woman approaches the drop-off counter, gingerly peeks inside the bin, then rudely interrupts the clerk to ask if it’s OK to add her single package. She gets a surly “That’s what it’s for” in reply.

The next person to approach the counter is an older Asian lady. I think she’s with the half-dozen young Asian women who are huddling just inside the door. The ethnic similarity between the old woman and the young group triggers something in the clerk. She yells across the lobby that the group needs to get out of the way of the door. The group, startled, timidly shifts around, then after a few seconds, exits en masse. Their reaction and movements remind me of gazelles being stalked by a lion. (I sure do miss Marlin Perkins.)

Meanwhile, the older Asian woman at the counter tells the clerk she needs to send something via “certificate mail.” I wince, presuming that the clerk will harshly correct her, but instead she points her towards the forms on the other side of the room. Then, noticing the woman is holding a loose stack of papers, she also directs her towards a rack where she can pick out an envelope to buy. (By the time I leave, the old woman will still be filling out the form. Her young friends huddling outdoors clogging the sidewalk, oblivious to the dirty looks from people leaving the nearby L station.)

I hear an exaggerated sigh behind me, I turn my head slightly to glance at the woman in line behind me. She’s impatiently shifting her weight from foot to foot, as if her fidgeting is a magical dance that will hurry things along.

The next person to approach the clerk doesn’t have an envelope either, but she wants to send Priority Mail and the clerk has a flat-rate envelope at hand. As the transaction is continuing, the customer removes a crumpled letter from her purse and asks why it was delivered to her home. The clerk takes it, compares it to the Priority Mail envelope that the lady has just finished addressing, and says, quizzically, “Because it’s addressed to you…?”

“Oh no, I sent this. The address it was going to is here,” she says, turning the envelope over to reveal its back.

The clerk looks at her in silence for a couple of seconds and says, “Well, that’s why it came back to you.”

“Oh, I guess I accidentally sent it to myself then.” She reaches into her purse again and removes yet another letter. “Well, why did this one come back to me?”

The clerk pauses for a longer time. Her eyes darting between the customer and the envelope. I think she’s counting silently to herself. Finally, she says, “This is a business reply envelope. You can’t cross out the ComEd address and send to somewhere else instead.”

“Oh, I guess that makes sense.” Her questions answered, and her transaction completed, the woman leaves.

The lady behind me clucks her tongue loudly.

Next is a young lady who pre-paid for her package online and believes, falsely, that she can just hand it over and walk away. The clerk stops her from leaving because she has used a Priority Mail box, but paid for First Class. The clerk tells her to repack the item into a plain box, which she must purchase, as only Priority boxes are free.

The next person to approach the clerk is a woman who has been busily packing and addressing an Express Mail envelope while she’s in line. My mind is wandering, so I miss the start of their interaction, but I’m jolted back to attention when the customer loudly exclaims “Twenty-Six dollars? You gotta be kidding.” The clerk says that is what Express Mail costs.

“You put it in an Express Mail envelope.”

“Go put it in a Priority Mail envelope instead, then come back up here,” the clerk suggests.

The lady walks away waving the envelope at all of us in line — “you all watch out for these twenty-six dollar envelopes! They don’t look like they are twenty-six dollars but they sure are!” She cackles, “that’s one expensive envelope!”

At last, it is my turn. I hand the clerk my peach-colored notification slip and show her my identification when she asks to see it. Meanwhile, a second clerk opens her window and the lady from behind me rushes towards it.

She plops the package down on the scale and, with a voice dripping with frustration, says, “Priority Mail.” The clerk glances at the package and slides if off the scale saying “This is the wrong kind of tape, I can’t accept this package.” “What? Are you kidding me‽” The tone of the lady’s voice catches the attention of the clerk who is helping me, and she chimes in ; “You can’t use masking tape, it won’t stay sealed.”

“It’s an FAA regulation, you have to use packing tape.”

“This is ridiculous!” She picks up her package and stomps out the door.

My clerk retreats to the back room to locate my package. While I wait, a middle-aged hispanic man approaches the other clerk with a dirty and dented Priority Mail box. He says “I’ve mailed this twice and both times it has come back to me. Why?”

Just then, my clerk returns holding my package. It’s a book sent to me from a magician in Singapore, so it requires a signature release. The clerk asks to see my identification again, I scrawl a “signature” on the touch screen with my finger, and I depart.

I guess I’ll never know why that guy’s package keeps coming back.

(Photo by Tim Evans on Unsplash. Thanks!)

Posted at 11:08 AM in Imagination in True Circumstances | Permalink | Comments (0)