The Old-Fashioned: The Story of the World’s First Classic Cocktail with Recipes and Lore by Robert Simonson was a gift from a dear friend, who clearly knows me too well. 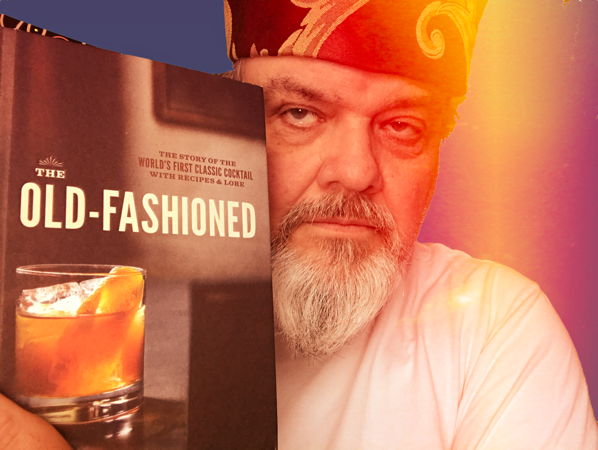 Half of the book is filled with inspired and tempting recipes for the drink, but it’s the first half that was truly delightful. Simonson has dug deep to uncover the origins and mythology of the drink, with the result being a love letter that those similarly smitten will savor and enjoy every bit as much as a finely made example of the subject. Here are some of my favorite (lightly summarized) bits:

During the early years of its prominence, the drink was widely regarded as a “matutinal cocktail” — that is you drank it in the morning. An 1874 piece of advice is that “a bourbon whiskey cocktail before breakfast is the best thing for complexion.”

Rather than chipping away at blocks of ice and getting irregular pieces, Chicago bartenders, in 1899, were the first to create uniform two-inch cubes so that every drink got the same amount of ice.

Originally, the Old-Fashioned was served with the spoon used to mix it (as it is traditionally mixed in the serving glass). It was awful manners to remove the spoon and lay it on the bar. “What of the danger, when bending an elbow, of jabbing oneself in the eye with the spoon handle? Well, anyone who drinks as hastily as that deserves to hurt himself.”

The prospects of determining the origin of the Old-Fashioned are dim, but there is fairly strong evidence it originated in Chicago. It was first documented in the city in 1899, along with a list of other “old fashioned” drinks with Gin, Brandy, and other base alcohols that I will now no longer consider to be abominations.

Chicago has long been a whiskey town. Only 300 miles from Louisville it enjoyed a ready supply of Kentucky bourbon. An 1870 survey found that of the $15 million spent annually on booze in the city, fully $9.6 million went towards whiskey. (Aside: in approximately 2010, a bartender who had newly arrived in the city from Ohio, told me she was very surprised how many whiskey drinks Chicagoans ordered.)

In 1945, a visitor at the Drake hotel (perhaps in the Cape Cod Room, which I miss very much) ordered an Old-Fashioned and told the bartender to leave out the fruit, except the lemon. The barkeep replied, in part: “I’ve built Old-Fashioned cocktails these sixty years. Yes sir, since the first Armour was using a wheelbarrow in a slaughterhouse, and I have never yet had the perverted nastiness of mind to put fruit in an Old-Fashioned. Get out, scram, go over to the Palmer House and drink.”

Although the drink is enjoying a comeback, there were some dark times for it not all that long ago. By the final decades of the twentieth century a young bartender was easily stumped by a request for an Old-Fashioned, and the patron ordering the drink was quickly tagged as a hopeless old fogey. (I experienced this at the lobby bar in the Paris Las Vegas not all that long ago!) The American Midwest is one of the key regions that saved the drink from being lost in time.

Simonson makes an interesting point that many drink recipes were forgotten during prohibition. An entire generation of bartenders lost. A consequence that I hadn’t previously considered.

The recipes in the second half of the book feature lovely photographs and mouthwatering descriptions. The section on “traditional” style mixtures is my favorite (especially since I don’t have most of the more exotic ingredients required for the non-traditional ones). I noted a few I’ll try, including an Absinthe Old Fashioned, the venerable Wisconsin Brandy Old Fashioned, and one that features Old Dutch Genever — a welcome discovery from our classes at the Bols Bartending Academy in Amsterdam.

While I was reading this book I was also impressed with its quality paper, binding, and overall production. I wish all books were as lovingly created, and no surprise, it’s another volume from Ten Speed Press. Get your copy at a nearby bookstore, or if you must, from Amazon. And, cheers!