Home Archives Profile Subscribe
Book Review: The Soft Atlas of Amsterdam
A true story in which I become an object in a scavenger hunt

A true story from Liverpool

“Can I ask you a question?” The ruddy mid-thirties man said eagerly, waving as he approached across the busy Liverpool town square. I don’t know what expression I gave him, but he quickly added “I’m not going to hit you, you’re bigger than I am!” Now within normal speaking voice range he asked Gale and me “Have you got a sense of humour?” “No” and “Yes,” we answered respectively and simultaneously.

Taken back only a moment by Gale’s response, Paul introduced himself and proceeded to tell us about the self-published humour magazine he “and his mates” were selling. He had a lot more to say, but I was lost in his verbal freight train of familiar syllables that only occasionally coalesced into recognizable words. Trance-like, I smiled, nodded, and decided I liked him.

After exchanging a fiver for two issues (one pound in savings!) I presented him with a Bucktown badge. As we parted ways with handshakes all around Paul leaned in and whispered to me “they’re good bathroom reading.” 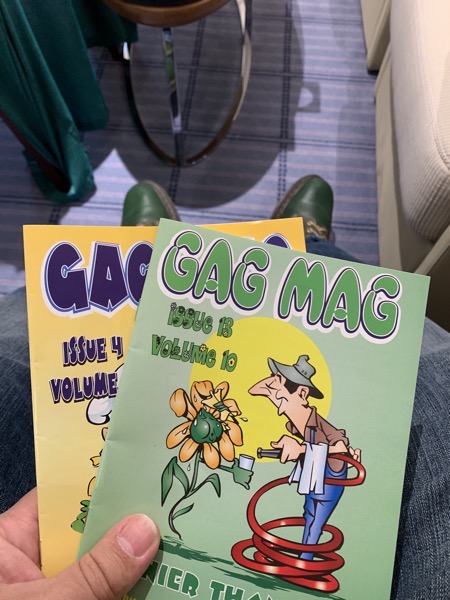 A few steps away, we turned back and Paul was approaching another couple, now wearing our pin on his chest. Gale said “Too bad that he lost his job after the brain tumor.”

What? Apparently, I had been smiling and nodding throughout his sad tale.