Most of the time the gate to my property is locked, but if we are expecting a package delivery I will leave it unlocked so the carrier can ring the doorbell and deliver the goods. That's what I want to happen, anyway, but most of the time the UPS, Post Office, or FedEx delivery person will just drop the package on the front step and leave. Why they can't be bothered to push the bell button as they hightail it out of my yard I'll never understand. The result is my package is sitting there, behind an unlocked (and sometimes left open) gate, ripe for the pickin' in the big city.

To combat this problem I decided that a chime, buzzer, or alert that sounded inside the house whenever the gate is opened would be a good idea. Of course my first inclination was to use an open/closed detector and program my home automation system to notify me when it was triggered.

But there are a couple of reasons that's not optimal in this situation. Briefly, there isn't a good chime module that works with INSTEON or ZWave (my technology of choice these days), and secondly, as fast as my home automation is, I didn't want to introduce the inevitable delays and complexities that a multi-stage system would introduce.

Another requirement is that I wanted the method to be wireless. While I could run wires to a switch on the gate, I really don't want to because it would require tunneling under a sidewalk and creating an opening for the wires to enter the house. Maybe I'm getting lazy.

After a lot of searching I settled on the Heath-Zenith Wireless Entry Alert Chime SL-6168. (See 2020 Updated below for more info!) The unit provides a wireless sensor to mount on the gate, and plug-in module inside the house that plays one of two chime sounds.

For my application the unit's range is working fine. The distance between the sensor and the sound module is about 30 feet, but it has to penetrate the brick walls of the house. The module is quite loud, and I'm puzzled by the Amazon reviews that say it is quiet. I didn't adjust its volume so I'm not sure if mine is turned all the way up, but it's certainly loud enough to hear it throughout the house.

The gate sensor takes a 12-volt battery, which I was initially a little concerned about as I anticipate having to change it often during cold weather. But I discovered that they're relatively inexpensive when purchased in six-packs. I just hope I don't have to change it too often during the winter as opening the unit is a little tricky and it will be freezing cold out there.

I attached the sensor on my gate using 3M double-stick mounting tape. (After making sure that the slight rattle of the door, when it's locked, wouldn't set it off.) The adhesive seems to be holding up fine. Here, the heat of summer could cause a problem with that, but I'm not expecting one. It has rained (and snowed!) since I've installed it, and the sensor seems very well-sealed, so no problems to report with that so far, either.

It was pretty much impossible to tell how big the two pieces of the sensor are from the Amazon listing, so here's a photo to help you judge if it will fit on your door or gate. 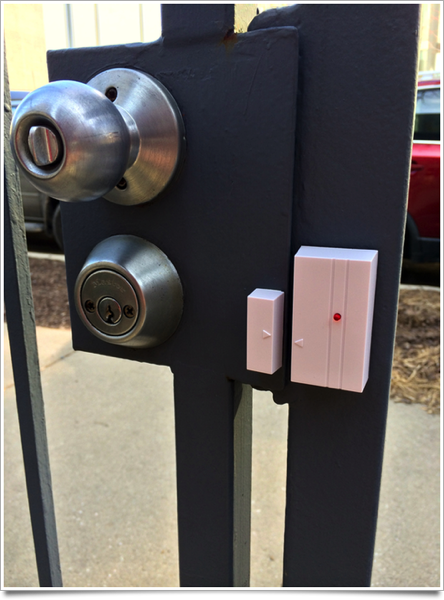 All in all, this solution is doing the trick, and I spent about half what a traditional home automation approach would cost. On the other hand, it's not at all smart, meaning the chime will go off at all hours of the day and night, and when nobody is home to hear it. A trade-off, perhaps, but the 5 minutes it took to install it is a benefit too. It's worth considering if this type of approach would meet your requirements.

2020 Update: After more than six years in use, the sensor box had become brittle and it broke when I was replacing the battery. (Which I had to do no more than twice a year, by the way.) In ordering a replacement, I found that the model mentions above is no longer made. But there is a newer model which works just as well (Heath Zenith SL-7368-02 Wireless Entry Alert Chime). The new one uses a standard coin-sized battery, and it can trigger multiple remote speakers. The speakers, however, are not quite as loud as the old model. This time around, I decided to mount the sensor using industrial velcro. This lets me remove it completely if I'm out of town (lessening the weather-wear) and will make it easier to change the battery.

A friend pointed out that the manual states the door sensor is for indoor use only. I consider that to be a weasel clause inserted by the lawyers, as the unit is quite well sealed and won't be standing in water. (I'll knock the snow off of it when shoveling the walk.) Since installation it has survived 2 rain storms and one light snow just fine. But head's up if you're not as casual as I am about these sorts of things.