I've been using a bedside iPad to control my Revolv home automation system, but I finally grew frustrated with that and sought out a replacement. (In brief, the in-humane double-tap icons in the Revolv app, coupled with the lack of a proper iPad version, pushed me over the edge.)

If you've read Smart Home Hacks then you know the solution I wanted was a tabletop controller. While I have Z-Wave controllers on hand, Revolv doesn't support those so I turned to INSTEON mini-remotes instead. I decided on the Mini-Remote Switch model, because for now, one state (asleep/awake) is all I need.

I've been struggling with the mini-remote and Revolv for about a day now. It worked fantastically the first time I tried it, then the next several times I tried it (including last night, when I really wanted it to work) the hub wouldn't respond to it. I'd press a button and nothing at all would happen. The lack of a debugging interface for the Revolv doesn't help here, but I decided that maybe my bedroom was out of range. So I swapped out a nearby Z-Wave lamp module for a dual-band INSTEON model. Still no luck.

I stumbled upon the answer completely by accident. The mini-remote is a lot more complicated sophisticated than it looks. Although there are only 2 buttons, each one can be pressed in a variety of ways, but only one way is recognized by Revolv. Sounds crazy, but a quick tap, long press, and double-tap are all different things to this switch. I was accidentally long pressing when I should have been quick-tapping. Problem solved.

Ironically, it was the finicky double-tap behavior of the Revolv app that drove me to the mini-remote, and now I have a finicky quick-tap to teach my family instead. ("You're pressing it wrong!" And people wonder why home automation is so slow to catch on?!)

A word about the mini-remote: Aside from the surprising feature set, I'm not impressed by the build quality. The switch is light, feels flimsy, and makes a disconcerting cracking sound when you use it. The battery situation is also interesting--you have to recharge the non-replaceable batteries using a USB connection. I hope each charge lasts a very long time as that seems like an unnecessary complication.

The Bose Solo TV Sound System is a nice, simple unit that works well. At least, so far it is. I haven't had it long enough full review. But first impressions are good. A couple of notes:

Most of the time the gate to my property is locked, but if we are expecting a package delivery I will leave it unlocked so the carrier can ring the doorbell and deliver the goods. That's what I want to happen, anyway, but most of the time the UPS, Post Office, or FedEx delivery person will just drop the package on the front step and leave. Why they can't be bothered to push the bell button as they hightail it out of my yard I'll never understand. The result is my package is sitting there, behind an unlocked (and sometimes left open) gate, ripe for the pickin' in the big city.

To combat this problem I decided that a chime, buzzer, or alert that sounded inside the house whenever the gate is opened would be a good idea. Of course my first inclination was to use an open/closed detector and program my home automation system to notify me when it was triggered.

But there are a couple of reasons that's not optimal in this situation. Briefly, there isn't a good chime module that works with INSTEON or ZWave (my technology of choice these days), and secondly, as fast as my home automation is, I didn't want to introduce the inevitable delays and complexities that a multi-stage system would introduce.

Another requirement is that I wanted the method to be wireless. While I could run wires to a switch on the gate, I really don't want to because it would require tunneling under a sidewalk and creating an opening for the wires to enter the house. Maybe I'm getting lazy.

After a lot of searching I settled on the Heath-Zenith Wireless Entry Alert Chime SL-6168. (See 2020 Updated below for more info!) The unit provides a wireless sensor to mount on the gate, and plug-in module inside the house that plays one of two chime sounds.

For my application the unit's range is working fine. The distance between the sensor and the sound module is about 30 feet, but it has to penetrate the brick walls of the house. The module is quite loud, and I'm puzzled by the Amazon reviews that say it is quiet. I didn't adjust its volume so I'm not sure if mine is turned all the way up, but it's certainly loud enough to hear it throughout the house.

The gate sensor takes a 12-volt battery, which I was initially a little concerned about as I anticipate having to change it often during cold weather. But I discovered that they're relatively inexpensive when purchased in six-packs. I just hope I don't have to change it too often during the winter as opening the unit is a little tricky and it will be freezing cold out there.

I attached the sensor on my gate using 3M double-stick mounting tape. (After making sure that the slight rattle of the door, when it's locked, wouldn't set it off.) The adhesive seems to be holding up fine. Here, the heat of summer could cause a problem with that, but I'm not expecting one. It has rained (and snowed!) since I've installed it, and the sensor seems very well-sealed, so no problems to report with that so far, either.

It was pretty much impossible to tell how big the two pieces of the sensor are from the Amazon listing, so here's a photo to help you judge if it will fit on your door or gate.

All in all, this solution is doing the trick, and I spent about half what a traditional home automation approach would cost. On the other hand, it's not at all smart, meaning the chime will go off at all hours of the day and night, and when nobody is home to hear it. A trade-off, perhaps, but the 5 minutes it took to install it is a benefit too. It's worth considering if this type of approach would meet your requirements.

2020 Update: After more than six years in use, the sensor box had become brittle and it broke when I was replacing the battery. (Which I had to do no more than twice a year, by the way.) In ordering a replacement, I found that the model mentions above is no longer made. But there is a newer model which works just as well (Heath Zenith SL-7368-02 Wireless Entry Alert Chime). The new one uses a standard coin-sized battery, and it can trigger multiple remote speakers. The speakers, however, are not quite as loud as the old model. This time around, I decided to mount the sensor using industrial velcro. This lets me remove it completely if I'm out of town (lessening the weather-wear) and will make it easier to change the battery.

Although it hasn't been updated in a very long time I still continue to rely on Namerick as a memory tool. I sure do hope it hasn't been abandoned, but as long as it continues to work, I'll keep at it. I currently have about 40 entries in it, mostly populated with the names of waitresses, bartenders, receptionists, and folks who make my day-to-day that much more enjoyable. Try it, it's worth the effort.

I'm still in mourning over the demise of PhoneValet, but fortunately I have an older Mac mini that's running it so it just keeps ticking away. I spend a lot of time on teleconferences, which of course require dialing into the conferencing bridge, then entering a passcode for the particular "room" the meeting is using.

Fortunately, PhoneValet's Announcement app continues to work on Mountain Lion, so this means I can remotely initiate a dialing sequence from any Mac that's on the same network as my Mac mini. The simplest way to do this is using a "tel://" URL. For example, "tel://18005551212" tells PhoneValet to dial toll-free Directory Assistance.

I use an Alfred workflow to make the task even easier. The workflow is hardcoded with the teleconference's main telephone number, followed by a 5 second pause to allow the call to be answered. After the pause, PhoneValet dials the room passcode, which I provide when I trigger the workflow. Here's a screenshot that shows how it appears when I trigger it, which I do with by typing "teleconf".

After triggering the workflow, PhoneValet displays its confirmation and all I have to do is take a phone off-hook to start the dialing. A few seconds later, I'm connected to the conference room. 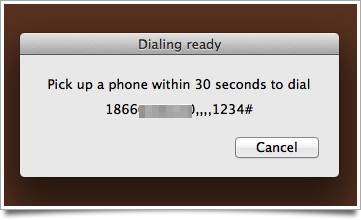 The screens below illustrate how this is configured.

I have the workflow configured so that the passcode is passed an argument via the Alfred window, but another way to do it would be to have the passcode read directly from the clipboard. Not the way I want it to work because I like to see it before dialing, but if sounds good to you, replace {query} with {clipboard} and change the "Argument Required" option. 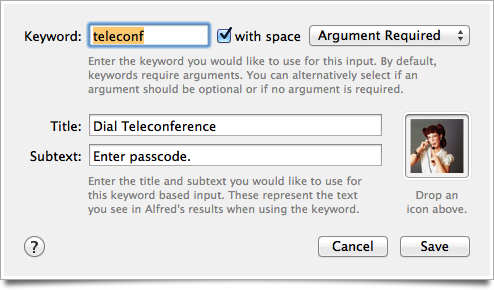 (Bonus points for recognizing who the actor is in the icon I'm using!)

Notice the "tel" URL. It's set to open in the "default browser" but OS X recognizes that PhoneValet can handle it directly. It just works.

Finally, note this technique should work with any app that supports a tel:// URL, not just PhoneValet. Those commas I'm using to introduce a 5 second pause after dialing are fairly universal, too.