Now this is modern writing

I can't even count the number of ways in which I love this story. An automated robot that writes up earthquake news, feeds it into a content management system, and suggests edits for the writer? I love the 21st century. How to Break News While You Sleep .

I have previously written about how the very small Fisher "Stowaway" model of the famous Space Pen is my constant companion. Three years later, that's still true. There are a couple of misconceptions about this pen, though, which you'll discover if you read through the Amazon reviews for the many (confusingly) product listings you'll find there.

First of all, it's not plastic. It's made from plastic-coated aluminum. But even if it were plastic, which again it's not, so what? It is strong and lightweight and attractive.

It is refillable. I wasn't sure about this when I first started using it, and it's easy to find Internet posts and reviews that say it's not. Apparently, even the Fisher company is confused about this as some people report that customer service has told them it cannot be refilled. They're all wrong. This review on Amazon reveals the secret. Just hold the pen straight up and push down on the tip with some force. The end-cap pops up and after that, Bob's your uncle.

Finally, any Space Pen user will tell you that the first sign that you need a new ink cartridge is that the ink starts to get gloppy. I hate that, and always try to refill right away. I've read that the "bold" and "fine" refills are less prone to this, but I haven't tried them (yet). You'll have to dig a little to find the bold ones, most of the time all you can find are medium.

DevonThink Pro comes with a printer workflow that lets you save a PDF to the app.

As much as I love DevonThink Pro (which is to say, a lot) I don't like this workflow. Only because it immediately launches the app. And because I rely on DevonThink Pro so heavily, and because it's a rich and complex app, it takes a while to open. And I rarely want to immediately go into the app when I'm filing a PDF. I'm just stuffing it away for future action.

So I finally took the time to create an alternative. It's so easy, I should have done it a long time ago. And you should do it too. Instead of launching DevonThink Pro, it saves the PDF to the DevonThink Inbox folder. From which it will be automatically imported the next time you launch DevonThink. So the end result is exactly the same, but without the interruption. 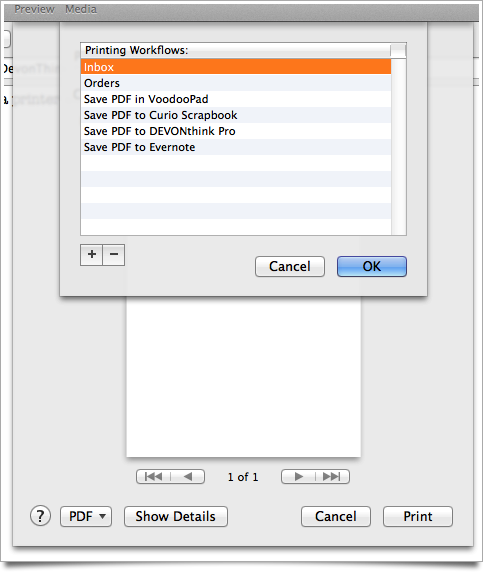 That's it, you're finished. Next time you want to stash a PDF in DevonThink, click the PDF button, click InBox, and then you're done. And back to work.

If you're trying to copy a file to your iOS device via iTunes, and iTunes won't accept the file and displays a message stating that the file cannot be copies because you don't have permission to view its contents, the most likely cause is that the file has an incorrect extension. For example, if your'e copying a .mov file, change it to .mp4 and try again. You're welcome.

I just spent 30 minutes trying to find the answer to this on Connected Data's support website, and via Google, to no avail. I finally figured it out by accident. I'm putting this here in case someone else is looking too in hopes they'll find it.

If you're trying to mount your Transporter (I have the Sync, but this should be the same) as an SMB device but it's rejecting your login, don't use the email form of your Connected Data account. Use your username instead. That is, instead of gordon@example.com, use "gordonmeyer". (Also, of course, makes sure you've enabled SMB login in the device settings.) The instructions that appear in the settings are not at all clear about which form is required.

As an aside, don't be surprised to discover that only shared folders show up on your SMB-mounted drive. According to Connected Data, this is a feature not a bug. I disagree. But the way to get around the boneheaded decision is to create a shared folder that's not shared with anyone else. Yes, really. I did find that on the support site.

When I heard the inventors of TiVo had a new enterprise, I was eager to check it out. Their new product, QPlay, is very interesting. My "early adopter" order arrived very quickly and I have been using it for a few days now. Basically, QPlay is sort of like a DVR for Internet video. But unlike TiVo, it has a social networking component. (I still don't understand why TiVo hasn't built-in Twitter; it seems like such an obvious add-on.)

The QPlay box is a tiny and silent computer that connects to your home Wi-Fi network and an HD TV, using an included (!) HDMI cable. There are no buttons on the box at all, but it does have a neat blue light that isn't very useful. (More on that, below.)

The most important thing you need to know is that QPlay is not just a piece of hardware, it's also a service and an iPad-only app. The three components are very tightly integrated.

Setting up the box was quick, but a little confusing in that once you've associated the QPlay box with your Wi-Fi network (which you do using the iPad app), there's no clear indication that you're finished. The process just sort of stops and your TV displays the smiling QPlay logo. When you see that, you're done. Fire up the app again and dive in.

When you're a new user, you'll see a welcome movie that is intended to orient you to all of the QPlay features. But it runs at a frenetic pace and there isn't time to absorb or understand what its trying to convey. Eventually you'll find it again, though, and you can re-watch it. Honestly, I learned more in the process of just finding the welcome video so I could watch it again than I did by actually watching it. Three cheers for learning-through-exploration!

Overall, QPlay is rather fun and not nearly as passive as regular TV, unless you want it to be. The app makes it easy to skip around and watch all sorts of different videos, or you can just veg out and let it run in a continuous stream of clips. It comes pre-configured with several different collections--such as segments from late night talk shows--that are curated for you. (Presumably by staffers at QPlay HQ.) It's also apparently possible (somehow) to create your own collections that you can share with others.

I like that you get a "Q" (queue, or as I'd call them, "channels") for movies shared with you via social media. But, as the TV is a family resource, I think there needs to be a way to view just the items from your own social accounts. When I sit down to watch, I don't want to see what my wife's friends are sharing, nor does she, mine.

I like that you can easily add videos to your personal queue throughout the day by using a bookmarklet. I've been doing this often and it works well for watching things later instead of when I first learn about them. I do wish I could add things via email, too, though.

One thing I don't like is that everything is set to auto play. As soon as you launch the app, it starts playing a video. When you change to a different collection, the first video plays immediately. Tap something else, boom, it starts playing. Arrrrgh! Once I've started watching a video, sure, go ahead and advance to the next one when it ends--maybe--but the current mode is more annoying than a two year old child on a caffeine high. Seriously. It also makes browsing while you're watching something else nearly impossible, if you just glance at something that piques your interest you'll end up accidentally playing, even if you were in the middle of watching something else. And good luck getting back to where you were, your viewing history is well hidden.

The other thing I dislike even more is that there is no way (apparently) to turn off the QPlay box or at least make sure it's not streaming a video. And because of the hair trigger auto-play problem, it's easy to start something playing by accident. If you do this, then turn off your TV, the QPlay box will sit there streaming endlessly--and eating your bandwidth--without you knowing its happening. (This is where the pretty blue light on the front of the box could actually be made useful.)

There are several other rough edges in the software, and given my "early adopter" status it might be a little unfair to be too overly critical, but here's a quick list of things I hope get addressed:


So overall am I happy with QPlay? Yes. The price is reasonable, the track record of the talent is top-notch, and overall it's quite promising. While I've mentioned some disappointments and areas for improvement, I'm satisfied enough that I'm eager for it to get better. It's not quite ready for prime time yet, but like the TiVo before it, this could be the start of a revolution.