I continue to dig my Hamilton Beach The Scoop coffee maker. After a year's use, I have a couple of tips to pass along:

If a cup comes out weak or light, it's likely because the grounds were not evenly distributed in the scoop. To prevent this, give the scoop a little shake after filling it so that the coffee is level across the entire surface. If it's not level, the water runs down the hill and only soaks through part of the grounds. (You can verify this problem if you empty the grounds and some of them seem unused.)

If you're using a filter, as I suggested in Hacking the Scoop Coffee Maker, try putting the filter in the middle section (so that it sits on top of the built-in filter) for an even stronger cup.

I've had a Sodastream home carbonator thingy for a couple of years now. I love it. I really enjoy carbonated beverages, and the Sodastream is an easy way to inexpensively have a lot of variety of pop (or, soda, if you're from the West) at hand.

I have to admit that I approached the whole idea with some trepidation. But my fears were unwarranted as the Sodastream is easy, clean, and fast to use. Dare I say it is even a little fun? Even if you don't enjoy it, you will enjoy learning just how little materials are used in making soda and how much price-gouging the big guys engage in.

The Sodastream model that I have is pictured below. I don't know exactly which one this is because they make a dizzying array of seemingly barely distinguishable models. (Seriously, wtf?) Presumably they all work the same, and aside from some unnecessary accessories, the models are interchangeable. If I were buying one today, I'd probably get this one. 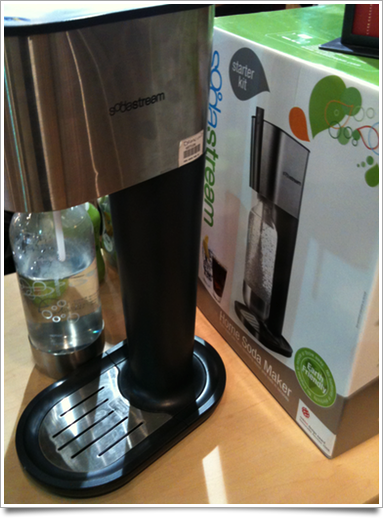 Now on with the tips!

I might periodically update this list as I discover or learn of more. (Please let me know of your own!)

Although the Fake TV is advertised like it's infomercial junk, it turns out to be a nice product. In brief, it's a small sophisticated LED light that emulates the patterns and colors emitted by a television. It's sold as a burglary deterrent, because it makes it looks like a home is occupied by someone watching the boob tube.

The device is smaller than I expected; about the size of a medium coffee cup. This turns out to be an advantage when it comes to proper placement of the device, but it was a surprise when I opened the box.

Fake TV really does generate a convincing illusion. But there are a couple of things you should be aware of, both positive and negative. On the plus side, because it's LED powered, it should last for a very long time and is inexpensive to operate. Although I use it with a timer so my neighbors don't think I"m an insomniac, it would be safe and efficient--but perhaps less convincing--to leave it turned on all the time. (There is no off switch, you have to unplug it to turn it off.)

On the negative side, the lights aren't very bright. This means that the Fake TV has to be positioned close to an uncovered window; it definitely isn't bright enough to shine through most window coverings. I also ended up putting the Fake TV on the inside window sill because my windows are covered with a UV-filtering film that has a slightly dark tint. The Fake TV's small footprint and light weight made this easy to do. (Just make sure that outsiders only see the light from the device, not the unit itself.)

The bottom line for me is that Fake TV is a useful and inexpensive home security addition. Amazon has the best price by far, and check out the reviews if you want more opinions. It has a large number of mostly 4 or 5 star reviews.

Update: After writing this review I noticed that there is now a brighter model, the FTV-11. I have the FTV-10. It costs about $10 more, but I'd get that one if I were buying today. The new one also has built-in timer and dusk options. The timer options remain unchanged from the first model.

Evoz and Belikin team up for audio-only monitoring

A follow-up to my post Audio-only monitoring of your pet. I recently learned that the Belkin WeMo Baby Monitor uses the Evoz service to do its work.

According to the listing on Amazon, there have been a number of recent firmware updates that, hopefully, address the reliability problems cited by many customers. This is similar to the problems I had with the WeMo switch, but after several updates the switch is now reliable.

Almost 10 years ago, I launched with website with the name "Nothing Up My Sleeve." Soon I'll be retiring the name, but I'll continue to post new content here. Please pardon the dust over the next several weeks as we remodel to better serve you.

Your baby's weight in gold

Wow, I'm a big fan of Withings Smart Body Analyzer and Baby Monitor, but their new Smart Kid Scale seems a bit too expensive at $249. I have it on good authority that kids tend to grow larger and will soon not be able to utilize this device. But I certainly won't judge you if you consider it worth buying, you can't go wrong with connected devices from Withings.

See also: My review of the Withings Baby Monitor