It's time to update the Saga of Ceiva. A tale of joy and frustration. If you're not familiar with Ceiva, they basically invented the connected digital photo frame. Such frames are more common now, but none approaches the level of sophistication that Ceiva brings to the table. But with great sophistication, comes headaches.

This chapter in my ongoing tale began when my in-law's frame stopped working. They love it, and it's paid up for the next several months, so I called Ceiva and learned, to my surprise, that they've recently added extended warranty coverage to their Picture Plan fee. This is a very smart move as it adds a lot of value to the service, which I've previously called overpriced. Ceiva said they'd send me a replacement frame at no charge, I just had to return the dead one.

About a week later I received a call from Ceiva. I thought something was wrong, but it turns out they were offering to replace my second, unused frame (which I never could get to dial-in correctly from our condo) with a wireless version instead. The cost was $100 (including the $10 Wi-Fi adapter) but that includes a year of Picture Plan. A good deal, so I accepted.

The new wireless frame arrived quickly. It's much nicer than the older models. The screen is brighter, it holds more images, transitions between images are available, and now there's an IR remote control. But what surprised me most is that this new frame will also display photos from a memory card. Update: The manual isn't clear about this, but I've been informed I'm mistaken. A Picture Plan is necessary for the frame to function at all. Bummer.

In the next chapter, I'll talk about the replacement frame they sent for my in-laws. Here the tale will take a less enthusiastic turn.

Stroke On, Stroke Off

Integrated and friendly sensors are an obsession of home automators everywhere. The build-it-yourself Soft Stroke Sensor could likely be adapted for friendly, if not fuzzy, home control.

If you'd like a simple home automation project--one that doesn't require a computer--and you have a cat, here's just the thing. An Automated Cat Feeder that's both clever and easy to build.

Come see me at The Magic Cabaret

On Wednesday, August 12, 2009, I'll be the guest performer at Chicago's Magic Cabaret. Get yourself a ticket and come see the show!

Here is a snapshot from my previous appearance in the show. 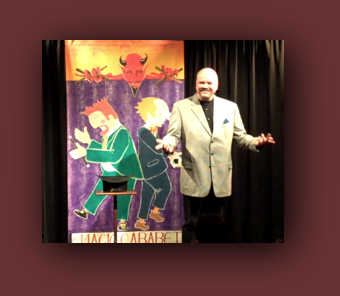 Give up a bad read

A while back, Nat Torkington observed that there's only so many more books one will be able to read before their demise, so one must choose wisely. And that number might be fewer than you think!

But there's a tendency to want to finish a book, even if it's not what you hoped it might be. Kelly Jane Torrance, writing Closing the book on a bad read - Washington Times also urges you to bail out of a bad literary journey. Scarcity (your remaining time) and the law of diminishing returns are both factors. Unclutter's take on it is that you'll have fewer books around the home, too.

Unfortunately, I don't practice what they preach as well as I should. Personally, the last book I gave up on was The Shape of Things to Come, which is chronicled here. Before that one, it was Prisoner of X, which I found to be repetitive and poorly organized.

So, I've been inspired to do a little book purging. Those that I can't find local homes for will end up on Bookmooch.