A nice article about how to use Shion, a little scripting, and a couple of INSTEON modules to efficiently cool an upstairs office is available at PommePause, the website of Guillaume Boudreau .

I love this kind of information because it demonstrates that you don't need a lot of equipment or technique to solve a common, yet vexing, problem. For another approach to this type of problem, see A Smarter, But Not the Smartest, Thermostat.

Paranoia in Your Pocket

New to iPhone, an application that utilizes the GPS functionality of the device to show you that you're surrounded by creeps and perverts. (As if you didn't already know.)

Offender Locator, for the mere price of 99 cents, will give you a real-time Google map of every registered sex offender in your immediate vicinity, including their address, name, and offense. 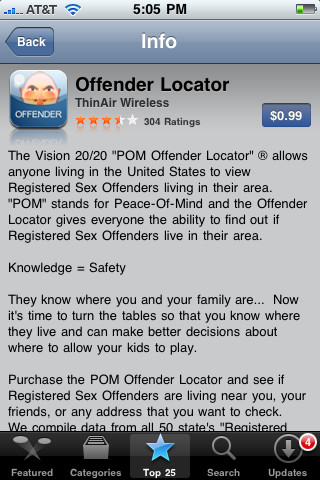 Clearly the possibilities are vast. Next up will be a version that taps in P.A.C. databases so you can know if you're walking through a neighborhood of like-thinking people.

Too many features, too little time

A few years ago, columnist Jim Sollisch wrote about his struggles with "feature fatigue," a condition that occurs when having too many choices results in inaction for fear of making the wrong decision. This condition is also elegantly described in The Paradox of Choice: Why More is Less by Barry Schwartz. I loved this book, and recommend it to anyone who is frustrated with current technology and marketplace. If you're in a position to choose simplicity and focus within your own work or company, please take pity on us consumers and opt for less, not more.

Following up on my series of Kindle posts, I must point out that Esquire--the best magazine in America--chimes in with a list of 14 things that Kindle cant' do.

Home notifications on iPhone via Prowl and Growl

The Apple Blog has a nice overview of an interesting new iPhone application named Prowl.

If you're a Mac user, and you're using Growl for notification of interesting events, then Prowl is a no-brainer addition for your iPhone. It's a $3 app that utilizes the push notification ability of iPhone to forward Growl alerts to your device.

If none of this makes any sense to you, see Nifty Notifications in Mac OS X and Growling PhoneValet for background info.

Book Review: The Secret Symbols of the Dollar Bill

David Ovason's The Secret Symbols of the Dollar Bill: A Closer Look at the Hidden Magic and Meaning of the Money You Use Every Day is a fun book of trivia and esoterica related to our most familiar form of currency.

Many people know about the easy to spot design features of the bill, such as the 13 arrows clutched by the eagle on The Great Seal. Or, perhaps, the Star of Solomon arrangement of the constellation above the bird's head. But Ovason goes much deeper than that, bringing out geometric arrangements and deep background on the unfinished pyramid, the treasury shield, and the Omega that surrounds Washington's portrait. (And much more.)

Unfortunately, the book is arranged in an awkward style that numbers each "secret" separately. Because so many of the observations are linked, and only make sense when considered in context with others, there is a fair amount of repetition throughout the book. This makes it frustrating to read, and contributes to the feeling that some of it might be padding to make the book more substantive than it really is.

I was prepared to dismiss the book as fun, but unsubstantiated, until I reached the very end. There I discovered a series of footnotes and sources that lend credence to some of Ovason's more obscure assertions. The book would have benefited greatly by giving an indication--any indication--that these existed in the main body of the text. If you read this book, be sure to read the notes in the back as you go along, I think it will significantly enhance your enjoyment of the book.

Overall, while the book is flawed and could have benefitted from a proofread, it's a comprehensive reference that brings out aspects of the dollar's design that are not easy to find elsewhere. In the end its low price makes it a worthy addition to a library of obscure knowledge.

It has been over two years since I wrote about how I've integrated Twitter with my home automation system, and since then Twitter has become an Internet darling. A coincidence, of course, but I've long since stopped trying to keep track of all the home automation uses of Twitter, it's simply very common these days. (To the extend that Twitter is common, which of course it isn't, outside of the cultural bubble of the web.)

Anyway, there are still two Twitter deployments that I enjoyed, but haven't noted, so here they are in brief form: