Writing for the New York Times, Michelle Slatalla says in Is Smart House Still an Oxymoron? that home automation equipment doesn't necessarily help your home's value, among other interesting observations. Somebody should tell Slatalla about the do-it-yourself approach instead.

If you want to be able to monitor your from remote locations, but don't want to set it up yourself as described in Macintosh Home Monitoring, then you might consider the AT&T Remote Monitor. There's a monthly fee, but the package appears to be complete and probably easy to use.

Zapper: iPod touch and iPhone control for your VDR

Thomas Herzog has released Zapper, a free iPhone application that allows you to control a Linux VDR (video disk recorder).

This, combined with Apple's own iTunes Remote Control, (iTunes link) are promising examples of WiFi-based home control. More to come, no doubt.

If there's a child in your life that shows an interest in magic, I have a couple of items to recommend as gifts.

The first is Magic For Kids. It's a DVD that isn't overly polished, but stands out because it features children performing and teaching the tricks. The explanations are clear, the tricks are good, but the best part is the encouragement and role modeling this approach provides. Particularly for girls, since it's not all little boys doing the tricks. I've given this disc to a few youngsters and it has been a hit.

If you'd rather give a book, an instinct I completely understand, then the recently published Hocus Pocus is a great choice. It's a nicely produced, hard cover book from Scholastic that features a great young readers story about magic history. Your youngster will learn true and amazing stories from magic's past (which is rich and fascinating, by the way) and will learn about 30 or so good beginner's tricks. And it includes an introduction by the actor who played Harry Potter, an endorsement that is sure to carry a lot of weight with young wizards. It's inexpensive, educational, and fun. What more can I say?

Also see my earlier thoughts and recommendations in Teaching Magic to Kids.

The grandfather of all Mac home automation programs, XTension, celebrates its 12th anniversary with the GM release of v6.0. This release includes plenty of goodies and fun features, including: 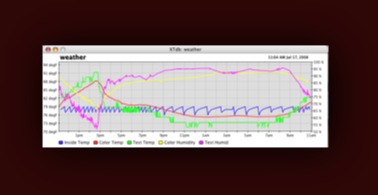 The base price of XTension 6 is $149, with a free "lite" version to try out. See www.shed.com for more detail about the changes.

iPhone and iPod touch for Home Automation with INSTEON

The SmartLinc is a very intriguing controller for do-it-yourself home automators. It's a lot like a standard controller, but connects to your home network so you can send it commands from over the web.

And the latest version has a web-interface that's optimized for Safari on iPhone and iPod touch. In fact, you can even get a free iPod touch when you buy an INSTEON starter kit that includes a SmartLinc. (Limited time offer, as noted on this page.)

Now, a couple of words about the SmartLinc. First, I haven't tried one. (But I'd like to soon.) Secondly, it's a standalone controller so you don't need a computer connected to it. You set up timers and so on using its web interface, then leave it alone (plugged-in, course) to just do its thing. This is an attractive alternative for people who don't want to dedicate an always-on computer to running their house. Finally, it doesn't work with X10-based modules, it only works with INSTEON. Again, this can be an advantage for people who don't have a slew of ancient X10 boxes already installed.

Update: August 13, 2008. The NetLinc has been renamed to "SmartLinc" so I've updated this post.

Catching up with O'Reilly contributions

My recent problems with TypePad prevented me from pointing out some of the pieces I wrote for O'Reilly Digital Media before I went on hiatus. So, I'll catch up with them all at once by listing them below. Hope you find something interesting among them:

Listen and learn about INSTEON, Indigo, and more

The UK-based Automated Home weblog has posted a half-hour audio podcast that includes an interview with Matt Bendiksen, author of Indigo for the Mac. Even if you're not a Mac user, you'll enjoy hearing about differences between X10 and INSTEON, the iPhone and iPod touch as home automation controllers, and other related topics. Go to Automated Home AH0014 Perceptive Automation for the link.

I haven't posted here lately because Typepad, which hosts this blog, suddenly started rejected my login when I used my editor, MarsEdit, to post new articles. In fact, after some excellent tech support from the MarsEdit creator, I discovered that Typepad was rejecting all XML-RPC login attempts for my ID.

I reported this to Typepad tech support about June 23rd. Today, July 4, I finally got a workaround. I'm posting it here in case another Typepad user finds they can't login and wants a more speedy response.

The answer is that there is "something wrong" with my user ID on Typepad. They're looking into it, but until it is resolved I can log in with my account's registered email address. That does work, and this alternative form of username is not documented or I would have tried it several days ago.