I've previously written about how I use Radioshift as part of my home automation setup. However, in the last week or so I've been using it as a desktop application, as it's intended, instead.

And frankly, it's driving me crazy. I'm continually running into two problems:

First, the show streams from KGO-AM are seriously messed up. Without exception, about half-way through the recording, the first 10 minutes of the show repeats. Sometimes this happens more than once. After the repeated segment, the show picks up where it was before the flashback. It's frustrating, and I've reported the problem to Radiotime (the provider of the streams), but it is exacerbated by Radioshift's interface.

Which is the second problem. Although Radioshift is sometimes described at "TiVo for radio," it really doesn't offer many playback controls at all. There's no "resume playback" feature, so if you stop listening to a show, you can't get back to where you left off. Not only does Radioshift not remember your stopping point, it does not offer any controls for navigating the recording. No rewind. No fast-foward.

But there's an easy workaround that you can use until Rogue Amobea addresses this oversight. Specify QuickTime Player as your "audio editor" in Radioshift's preferences. Then, when you want to listen to a show, click "Edit Audio" to automatically open the recording in QuickTime Player.

This works exceptionally well because QuickTime Player, even without buying QuickTime Pro, provides almost all the playback controls that Radioshift lacks. My favorite is that the fast-forward button, if held down while the audio is playing, allows you to skim ahead and easily skip over commercials.

If you do have QuickTime Pro, you can use the AV Controls to speed up the playback of talk shows. Simply open the AV Controls window, then adjust the Playback Speed setting. I use about 1.5X faster. Then, adjust the Pitch Shift slider until the voices sound normal again. It's really quite amazing and a great time saver. 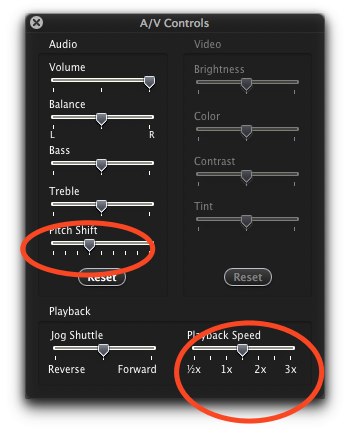 Finally, don't forget that you can also skip to points in the recording by dragging the playhead. If you want to temporarily mark a point in the recording for later review, use the "I" and "O" keys during playback to set selection markers in the QT window (QT Pro required).

I hope these tips help you get more out of Radioshift. If you have one of your own to share, please leave a comment.

NOTE: This piece is cross-posted from my MacDevCenter blog. If you'd like to read, or add, a comment please go there.

Truth be told, I read quite a few books, but hardly any novels. But there was something about Crooked Little Vein that got me to buy it. Admittedly, it might have been the cover that first caught my eye, but the synopsis is probably what drove my purchase decision. I'm glad it did, because the book's protagonist is a character who is very hard to forget.

A down-and-out private detective who is cursed with the unique ability to attract the lowest of low-life, he's a "shit magnet" whose latest client is the US Government. He's hired to help recover the only copy of a "secret constitution," drafted by the Founding Fathers for use only in an extreme culture emergency, which was traded away to a prostitute by a former president.

The book is a quick read, and nearly perfect for on-flight entertainment. The book is filled with the seedy themes and "adult situations," and I think it's the modern descendent of hard-boiled crime fiction from the 30s. If you're the sensitive-type or easily shocked then steer clear.

The 43Folders piece Workflow for the Fujitsu ScanSnap reminds me that I haven't written about how I've been using my ScanSnap S500M. I got it about 5 months ago, and its easily the most useful electronic gizmo purchase of the year. (Since I bought it, the newer S510M has been released.)

I was hesitant to get a ScanSnap because of its price, but when I discovered that it was available through my credit card company, via Amazon, in exchange for "reward points" I dove right in. I already had a flatbed scanner, but the ScanSnap's document feeder and single-pass duplex scanning makes it a lot faster and less hassle to use compared to a flatbed. (It's not, however, a high-resolution photo scanner so if you're into that, you'll need to keep your flatbed.)

My second concern was about the size of the scanner. I really don't have room in my office for another piece of equipment, so I was pleasantly surprised to find that the ScanSnap is a lot more compact than it appears in a photograph. Its footprint is less than the size of standard US piece of paper, and its height, when closed, isn't much taller than a CD jewel case. You need a bit more room when it is open, but it is very portable and I keep mine tucked away behind my Cinema Display when I'm not using it.

I've been using DevonThink Pro Office to catalog and manage the PDFs that the SnapScan creates. So far, I've got about 1,000 documents spread between three DevonThink databases. (I have no idea how many pages that is total, maybe around 5000, see below for details.) Here are some notes about my workflow:

Speaking of DevonThink Pro wishes, here are some additional items that would improve my satisfaction:

So, all-in-all, I'm satisfied but there are plenty of opportunities for improving the workflow. I think the DevonThink Pro Office, PDFPen, and SnapScan combination is a real winner. There's no doubt that this is the first time that I've felt good about converting to a strictly digital storage method for paper files.

If I discover any more tips, I'll add them later. For now, just a quick note that SnapScan and DevonThink Pro Office are working just fine for me under Mac OS X 10.5 Leopard. If going paperless appeals to you, now might be the time to dive in.

(This piece is cross-posted from my MacDevCenter blog. If you'd like to add or read comments, please go to the version there.)