The article Popcorn becomes a horror show describes how microwave popcorn might be harmful to your health.

It also might be harmful to your tasting ability. The commercial success of microwave popcorn can't be denied--it surely accounts for the vast majority of popcorn sales--but we've become accustomed to its dried-out, chemical-laden taste. (I blame the start of the demise on hot-air popcorn poppers. Surely an invention of the devil himself.)

Seriously, real popcorn tastes so much better. The reason that many don't bother to make is inconvenience and nutrition. The latter is a myth, however. According to Calorie King, oil-popped popcorn, which doesn't need butter, has less fat than some brands of faux-buttered microwave popcorn. When you make your own popcorn, you're also able to control the sodium level, which is very important for some people. 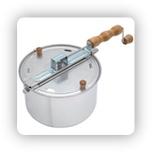 That leaves the so-called inconvenience of real popcorn, but thanks to a relatively new invention this is also no longer true. I've been using a WhirlyPop popcorn popper for several months now and couldn't be happier with the results. It makes perfect popcorn, and clean-up is a breeze. I just use one tablespoon of corn oil, a half-cup of kernels (which costs pennies, another advantage over microwave popcorn), and in about 5 minutes I'm ready to serve hot, delicious popcorn. There's really no comparison when it comes to taste. And yield is better too, thanks to the clever rotating crank (which you don't have to turn until the popping starts) there are very few unpopped kernels ("old maids").

If you've forgotten what real popcorn tastes like, or if you remember but have denied yourself its pleasure, give the Whirlypop a try. I think you'll like the results.