In Smart Home Hacks, I discuss how to utilize network-based Caller ID notification with your automated home. For Mac users, CIDTrackerX from Afterten Software is a key application for this sort of thing. A recently released update makes the program a Universal binary, adds Growl support, and many other useful tweaks and features. Well worth checking out.

So far, I'm pretty much enamored of Rogue Amoeba's new Radioshift application. If you haven't tried it yet, it allows you to easily listen to, and record, radio shows from around the world. It makes automatically recording new episodes of a show, or "subscribing," as simple as TiVo does for television programs.

I think Radioshift would be a wonderful addition to my home, and I want to run it on the Mac that I already use for home automation. However, Radioshift isn't really optimized for use in a "server" situation. That's understandable, but it hasn't stopped me from tying to bend it to my will anyway. Here's are notes on my progress so far:

• I love that Radioshift uses a background process for recording shows that you've subscribed to. This means that you don't have to leave the app running all of the time. You can use the sound files directly, without opening Radioshift, too. You'll find your recorded shows in the ~/Music/Radioshift/ folder.

• I want to listen to my recorded shows using another computer, because the home automation Mac is tucked away in a corner and I rarely use it directly. Radioshift doesn't have any built-in support for sharing, but I can load the above-mentioned files into QuickTime Player (or similar) after mounting the server's drive. The bonus prize for doing this is that QuickTime Player allows you to fast forward during playback, to skip commercials, which is a feature that Radioshift currently lacks.

• If you don't care about skipping commercials, just use the Finder's built-in ability to play QuickTime files, as shown below. Very handy! 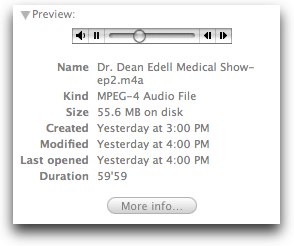 • Radioshift does, apparently, have the ability to add recordings to your iTunes Library. This means you could use iTunes sharing to listen to the shows on other computers. However, this doesn't work for me. First, I haven't been able to get Radioshift to successfully add a recording to iTunes. But even if it did, it's a manual process (Radioshift doesn't do it automatically) and I don't want to keep iTunes running on my home automation Mac.

Although parts of this feel a little awkward, so far I've found it worth doing. I hope that as Radioshift continues to evolve the process will get easier. If you have tips to share, please feel free to chime in.

Many of people would like to have a light (or a fan, or a radio, or other appliance) turn on when they enter a room, but they don't know how to easily make it happen. If you look online, or in a book about home automation (such as Smart Home Hacks) you'll probably be steered towards an X10-based solution.

That's all well and good, but for some people its intimidating and requires too many pieces of equipment. I've talked to many people who just give up at this point.

Luckily, there's a simple solution to a simple problem. If all you want to do is turn something on when a room is occupied, use the SensorPlug Motion Detecting Outlet.

You simply plug the appliance (500W max) into the SensorPlug, plug it into a wall outlet that's positioned where it will "see" activity in the room, and then turn on the appliance. If you want to get fancy, you can set it so that the outlet is activated only when its dark, and set how quickly the outlet is turned off when the room is empty. Simple and smart.

I have telco-provided voice mail on a land-line. I like it because its easy to retrieve messages from anywhere and, unlike answering machines, it allows callers to leave a message instead of getting a busy signal if I'm on the phone when they call.

I think its overpriced, but still deem it worth having. However, for the last week I've had lots of trouble with the message-waiting indicator. (You hear a stutter in the dial tone when you pick up the phone, this indicates a message is waiting.) The time between a message being left and the indicator getting set has always been too long, in my opinion, but now it was stopped working entirely.

I called AT&T this morning and learned the following:

When you are finished listening to your voice mail, always press * (star) repeatedly until you hear the prompt asking you to enter a mail box number. If you simply hang up, your mail box is in a bad state and the message indicator will not function correctly.

Unfortunately, this isn't documented in the voice mail instructions that I received when I signed up for the service. And while "logging out" isn't that big of deal, its quite bad that failing to do so can disrupt a major feature of the product. Apparently, they have no plans to fix this bug. So, take note.

If you're curious about home automation, or if you want to get a peek at INSTEON devices in action, a visit to Smarthome's Video Vault will be worthwhile.

For a good overview and demo of remotely controlling your home, start with the INSTEON remote link showcase video.

For a peek at what its like to install and configure the INSTEON starter kit, watch the Plug-in Dimmer Starter Kit video. As a bonus, you'll also get a nice tip about how to tell when outlets in your home are on the same electrical phase.

At this writing, there are over a dozen videos available. And, in a very nice move, written transcripts are also provided to make referring back to details much easier. However, the videos are in the proprietary WMV format. Mac users can use the free Flip4Mac QuickTIme component to view them; Linux users will have to rely on the transcripts. Aside from this unfortunate restriction, the Video Vault is a great resource.

Book Review: Do You Think What You Think You Think is not what you think

I found Do You Think What You Think You Think? on the new releases table at the bookstore and I was immediately attracted to its premise. It promises to uncover the reader's beliefs, and to help strengthen and identify one's core philosophy. So, I bought the book and looked forward to working through its exercises on my next airplane trip.

Unfortunately, my affection for the book, if not the concept, took a turn for the worse about two hours into the trip. At first, the authors draw you in with several questions that require you to make a concrete judgement about what are usually considered to be "gray areas." For example, you're asked to agree or disagree with the statement "It is always wrong to take another's life." That pesky word "always" be damned, make your choice--there's no "maybe" option available.

Later, after many more questions where my rationale (and answers) hung on the specific phrasing of the question, I learn that my overall score indicates that, in the words of the authors, I am either a mass of contradictions or a very subtle thinker. Thus arriving at my first indication that this book is really about making snap judgments, reading a pithy observation, then moving on to the next "gotcha."

Reading this book is an active endeavor. You'll need a pen to jot down your answers and, unless you're the type who writes in books, some paper to keep track of your scores and answers. And be prepared to do a lot of flipping of pages as you compare your impressions of a question to the author's assertions. In some cases, you'll find yourself disagreeing with how a question is phrased and then later re-interpreted to "prove" some point. In fact, the authors expect you to disagree and argue with the book. But as they say outright in its early pages, don't bother emailing or contacting them with your complaints, they just aren't interested. And for good reason, there really isn't enough meat in this book to have more than a Fox TV "whoever yells loudest" wins discussion anyway.

If you're looking for a little entertainment, with a Philosophy 101 bent, Do You Think What You Think You Think? might keep you busy for a while. If you're hoping to actually learn anything about yourself or discover a new way of thinking about life's big questions, keep searching.

A tool for writing with Macintosh

If you're a Mac-using writer, check out Steven Poole's article Goodbye, cruel Word. Like Poole, I've written almost nothing in Word since discovering Scrivener.

Following up on my experience with iPhone headphones, here's what I'm currently using for carrying cases. My day-to-day case is a venerable iPod Sock. Not only are they a great value (six cases for the price of one), they don't add any weight or bulk and easily stretch to hold an iPhone Bluetooth headset, too.

For airplane travel, I temporarily switch to a Belkin Crystal Case. It has a kickstand that props up the iPhone at the perfect angle for tray table video playback. Having spent many flights holding my video iPod for the entire flight, this case has been a real treat. It works as a belt-clip style case too, but I'm not sure I'd trust it to hold the iPhone securely. However, for watching video, it's superb.

For information on other cases, see this Chicago Tribune article.