Home Archives Profile Subscribe
Runners out my window
"Presence" for your Mac, today 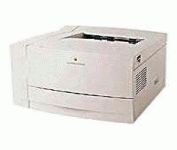 My trusty laser printer, an Apple LaserWriter 12/640, has been out of commission for more than a week. Every time I tried to print the paper would get jammed up, accordion-like, between the toner cartridge and the fuser. Oh, dismay! I've had the printer more than 10 years, it's the second-to-last laser printer model produced by Apple and its a major workhorse. It has reliably produced over 10,000 pages from its Genuine PostScript, 600DPI, 64MB RAM-equipped innards.

I'm handy with software, but laser printers are mechanical, messy, and mysterious to me. So I called all over Chicago looking for someone to fix it. I only found one guy who was interested in working on an Apple printer, and he wanted nearly $100 just to diagnose it. Ugh. I have a nice HP color laser printer too, so I was tempted to just send this one to the junk heap, but I knew I'd miss its fast and economic printing if I did that. (Not to mention feeling a good measure of disposable-society guilt.)

So I turned to the 'net. I read dozens of web pages about what might be the cause. Information about paper sensors, rollers, and bad fusers swirled around in my brain. Today, I decided to put some of it to use and really try to figure out what was hanging-up every sheet of paper. I opened up the printer and was surprised when a piece of broken plastic skittered across the floor as I removed the toner cartridge. It's an after-market generic cartridge that I put in a couple of months ago. It didn't fit as well as the Apple toner cartridge, but it seemed to work. I couldn't identify where the plastic part had broken off, but now when I put the cartridge back in the printer it fit better than it ever had before. And, to my delight, my printer worked perfectly again!

So, two lessons here. The first is that no-name cartridges don't necessarily fit this printer very well. And if the cartridge doesn't fit exactly right, it can cause confounding paper jams. Secondly, in all of the reading I did about troubleshooting laser printers, none of the sources mentioned the cartridge as a possible cause. So, dear reader, should you find yourself in the same situation, check the damn cartridge first.

A useful source of information and repair/replacement parts for most laser printers is "Mo" at www.fixyourownprinter.com.
Reading through the forums and a couple of very reasonably priced repair kits helped me keep my LWiig running for years before bought a new printer.
The repair kits come with video 'how to do it' instructions.

I have a colleague with a old mac laser writer 12/640 and i am getting an error that says "pre-registration misfeed. Does any one have any ideas how to fix this.