I think that Hallowe'en is probably the most popular holiday among home automation enthusiasts; it's certainly the source of a lot of neat ideas for (temporarily) haunting your house.

One of the best "tricks" is to activate your mechanized ghouls, or start creepy sound effects, when the kids approach your home. It's easily accomplished using a variety of Motion detecting switches.

If you've ever been on the receiving end of Hallowe'en pranks, and this year you want to turn the tide, a good solution is the Scarecrow Animal Repeller from Smarthome. It'll blast water towards anything that moves into the area that you want to keep clear. That'll teach the little hoodlums, right?

And it almost goes without saying that you can otherwise utilize these items for plain ol' home automation throughout the rest of the year.

The anatomy of O'Reilly books

My publisher, O'Reilly Media, through O'Reilly Labs offers a anatomical peek at any book they publish. For example, you can learn that Smart Home Hacks consists of 395, 370 words, 128 code examples, and 177 figures. Aside from being fascinating in a navel-gazing fashion (for me, anyway), it's useful for gauging the contents of books you might want to buy.

Another really nifty tool from O'Reilly Labs is Code Search . It allows you to search the source code examples from almost 700 O'Reilly books; over 123,000 examples in all. For example, this search returns nearly 100 sample code blocks that relate to Python and mail.

Who says astronomers don't have a sense of humor? The space rock that caused the demotion of Pluto from planetary status has been
named Eris, after the Greek goddess of discord. Wholly Chao!

Perceptive Automation, makers of the Mac home automation program Indigo, have released a public beta of the forthcoming Indigo 2.0.

There are a lot of interesting changes, but two have really caught my eye. The first is the Client-Server architecture, which introduces a number of interesting benefits, not the least of which is you can now run the application as a GUI-less process and control it from another computer. Just the thing for the Mac Mini you've got next to your TV and stereo.

The next eye-catching feature is the built-in Web server and email support. It's long been possible to control your Mac-based home automation in this fashion, but Indigo 2.0 appears to raise the bar quite a bit. The live demos that are featured on the page I linked to above are quite tasty. 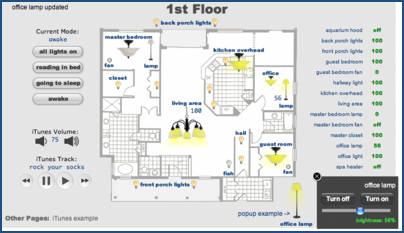 There's a lot more, including RSS feeds and new triggers and actions, so drop by the website and download the beta. Don't forget to sign up for a 60 day trial license (normally 30 days, but extended during the public beta) and get busy. I'd love to hear what you think.

Speaking of right out of the pages of science fiction, the Locate 1 device and service seems like something previously only seen on episodes of the A-Team or Knight Rider television shows. It's a small GPS-enabled transmitter (about the size of a deck of cards) that sends its signal to a website where you can easily track the current location and rate of travel of whatever you've attached it to. The ad copy in the latest Sharper Image catalog suggests that its easy to hide in a car, inside a kid's backpack, or in a briefcase full of hush money. (OK, I made up that last one. But you get the idea.)

Now at $500 for the transmitter plus a monthly fee that varies by how often you want the device polled (every five minutes or hourly) this isn't an inexpensive solution, but the fact that it exists at all for the consumer market is really quite remarkable. You can even set up email alerts for out-of-bounds conditions like speed or range of travel. This means you don't have to actively monitor the device at all, you can get a message on your cell phone as soon as your kid drives the family car too fast or too far away from home. Then log onto the web and see all the details, including a map of their location at the intervals you've selected. Or, for less dramatic use, if your loved one is going off on a solo weekend hike have them take this along and you can track their progress and know when to pick them up at the trail head. Welcome to the 21st century.

Food storage from the future

"Plastics." Long a watch word of futurists, I think I've just seen a product that ensures it will remain so for a few more years. I'm speaking of the FresherLonger Food Storage System. Not your typical Tupperware, these containers are infused with nanoparticles that inhibit germs, mold, and fungus growth. (Um, nevermind the sickly yellow color of the plastic, OK?) First came nano-pants that you can't stain, and now this. This is the 21st century we were promised!