At first glance it appears to be not very interesting, after all HomeLink has been around a long time and offers similar functionality. (I use it myself. Readers of Smart Home Hacks should refer to "Hack 57 - Control Your Home From Your Car" on page 206).

However, HomeLink is designed to work with X10 home automation systems. Car2U is based on the much newer, fancier and more robust Z-Wave standard. See the Car2U website for more info, and check out the interesting gateway module at the top of the accessories page. I wonder if it would work as a generic Z-Wave scene controller?

An AP wire story about smart clothes washers and dryers has some interesting tidbits about what the new network-connected machines are capable of doing. For example:

Of course, in an effort to seem like balanced coverage and not just a commercial for the appliance manufacturers, the article has the requisite scoffing reaction:

I'm reminded of similar comments about microwave ovens, cable TV, and automatic transmissions. Personally, if technology can help remind me of forgotten tasks, especially preventive maintenance, I'm all for it.

Oh, and let's not forget the also required humorously sexist quip to close the article:

An article by Lisa Anderson, Give Yourself a Break, describes some interesting psychological research about what causes people to experience regret. It's a good read with a couple of surprising moments. For example, it turns out that regret over things you didn't do lasts longer than than regret over things you actually did.

Another surprising revelation is this offhand comment about iPod:

Hmmm, well, applying your newfound knowledge about regret, you should certainly buy one anyway. If you don't, you'll regret it for years. You can thank me later.

Chicago's Museum of Science and Industry (located in the last remaining building of The White City) is hosting an exhibit on DaVinci's inventions. Their ads for the exhibit feature various "modern inventions" including an automated lawn mower. 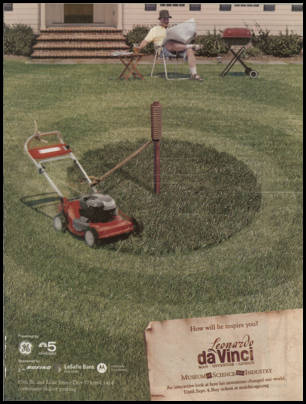 Now I wouldn't claim that Smart Home Hacks is up there with the famed notebooks, but do let me point out that this fanciful ad may have been inspired by Hack #63 - Mow the Lawn, contributed to the book by Doug Smith. And, in case you're wondering, Doug's version actually does work.

The museum's exhibit, by the way, is quite neat. They've built working models of several DaVinci inventions, right out of his notebooks, and many of them are hands-on so you can appreciate how the work. You'll want to try to go outside of school hours so you don't have to fight too many young hands for your turn at the wheel, lever, or pulley.

I want you to wake me

Do you ever wish that you had a hotel-style wake up call service for when you're at home? If so, try out McDonald's new McWakeUp promotion. In exchange for listening to a brief ad when you schedule your wake up call, McDonald's will ring your phone the next morning at the time you specify.

I tried it out this morning with mixed success. Let's start with scheduling the call. It's a very easy process and the voice talent they're using is engaging and appropriately humorous. You get to pick the recorded message that's played to wake you up, my choices included a variety of sports figures, celebrities, Ronald McDonald, and the never-say-die rock band Cheap Trick. I selected the latter, Rick Nielsen is co-owner of the excellent Piece restaurant, which is nearby, so it was an easy choice.

This morning, the call came at exactly the time I specified. However, I didn't get to hear my message because the call originates from a number without Caller ID, and my phone is set to screen those calls. I got the screening request, but the wake-up server disconnected before I could allow it through to my number. Darnit.

If you want to try it out, dial 1-888-GO-McWAKEUP. I think that's a Chicago-centric number (the celebrities were very much local favorites) but I imagine it will ring any phone that you provide.

Broadly speaking, there are two approaches to home automation. One is to have a personal computer that's dedicated to acting as a central controller. Clearly I'm a big advocate of this approach, and I practice what I preach (as the saying goes), because it allows you to build the most flexible and "smart" home automation system.

The other approach is to deploy individual semi-smart devices, each with a special purpose and single function, but none of them communicating with each other. This is a valid approach too, of course, and if you have just a few things that you want to accomplish its often the least expensive route. For some, these devices are the "gateway drug" to full home automation. That's my story, I started with this approach then quickly moved on to a centralized controller when I wanted a more integrated system.

Nevertheless, lately I've begun to re-discover the simplicity of dedicated, disconnected hardware. I've written about my standalone webcams before, and they're still among my favorites, but a couple of new toys have caught my eye lately.

First up is the TeleSpy. It's a telephone with a built-in motion detector and microphone. Turn it on before you leave the house and if it detects anyone entering your home it will silently ring your cell phone and allow you to listen in for 30 seconds. More than enough time to determine if there's something going on that you should worry about. It's a regular phone, too, so it doesn't appear suspicious and has utility beyond home security. (If you have pets, of course, you'll need to consider where you place it in your home. One of the contributors to Smart Home Hacks suggests that putting it in a room with a closed door adds an extra layer of security. This will reduce false alarms and when you get the call you know that someone has opened the door, a good indication that Fido isn't the culprit.)

I'm also intrigued by the Water Warning Leak Alarm. It's a battery-powered box that emits a shrill alarm when its sensor detects moisture. If you have a damp basement or a leaky water heater, this can bring you peace-of-mind. Edward Cheung describes how alter a smoke alarm to build a water detector in Smart Home Hacks (See page 169) but the low cost of the Water Warning makes the pre-built approach well worth considering.

The bottom line? When the cost of a standalone device is relatively low, and its utility immediately beneficial, I no longer hesitate to consider adding one to my home.

It almost borders on the cliche, but there are two common motivations for wanting to get involved in home automation. In most cases you either want a home security system or you want to automate your morning coffee pot. Seriously, while obviously not everyone falls into one of these groups, you can do a good quick sort of the community by dividing among these lines.

That's why I had to laugh at the CommoCoffee 64. It is a 1985 peripheral for allowing a Commodore 64 computer to directly control a coffee maker. The text is not in English, but there's a nifty photo scanned from the Italian magazine Microcomputer. Whacky, but not all surprising given the holy grail status of coffee pot automation. (Thanks for the link, BoingBoing.)

I almost didn't include coffee pot automation in Smart Home Hacks, but a close friend and tech reviewers insisted that it was necessary. Thus, if you have the book, turn to Hack #37 for full details on how to accomplish this using more modern techniques.