For those who have been lovingly (and longingly) holding onto their old YoYo telephone device from the defunct Big Island Software, Parliant's offer of a competitive upgrade might just pry it from your hands.

The YoYo was a great telephone interface for the Mac and PC and almost everyone who had one mourns its departure. For quite a while old units would get top dollar on eBay, but those times have passed, based on some recent sales.

I use PhoneValet, and I like its stability and quality, but it is missing some key YoYo features, unfortunately. On the other hand, it is a modern program, is updated frequently, and you can get support for it. Maybe it is time to let go of the past, eh?
Oh, and if you have one of several other telephony system you can get in on the upgrade rebate too.

Getting productive with WebDesktop 2.5

When WebDesktop arrived a couple of year ago I thought it was a cute idea. (I think it was also one of the first apps to take advantage of WebKit in an interesting way.) Now there's a new version, and it's still cute, but I'm quickly finding it useful for getting things done.

I use WebDesktop 2.5 to place my Tasks Jr.-based To Do list on the Desktop of my second monitor. This works out very well because you can't accidentally close the window, which is too easy to do when using a regular web browser for both task management and surfing, and the To Do list remains visible all the time where it can silently nag you. (Or maybe mock you, depending on your perspective.) When you need to mark a task as completed, or add a new item, just Command-Tab to WebDesktop (or click its icon in the Dock) and the WebDesktop window becomes fully interactive. Switch to another app, and the task list is instantly back on your Desktop in full view, but again inactive. The new version of WebDesktop has only been out a short time, but so far this technique is working out very well for me.

Some people view home automation as silly, or not worth the effort. I never to try to argue otherwise, I think it's something that either appeals to you, or it doesn't, and that's just fine. Clearly, it appeals to me. However, occasionally I come across a story that moves me, temporarily, into the "I don't get it" camp. Here' an example: For workaholics, one less refuge from a home office.

A shower that automatically turns itself off when the phone rings? A touch-screen computer mounted within reach of the toliet? Puhlease.

Although, the part about the BlackBerry repair shop that gets about 100 dead crackberries a day to fix, about 10% of which have been dunked, is quite amusing.

Hot on the heels of an update to Phlink, the other Mac-based telephone control software releases its next major version. Parliant's PhoneValet 4 adds several new features including automatic call recording and archive, with a web-interface to your archives for easily location and playback of any call, and other updates, including Universal Binary format.

If you haven't purchased PhoneValet yet, you'll be pleased to know that price has now dropped to $170. PhoneValet 3 owners can upgrade for free, earlier versions can be upgraded for $30 per line.

At the January Macworld Expo, Ovolab was demonstrating the forthcoming version of their telephone automation product, Phlink. The new update is now shipping and is available for previous owners for $40. This version adds call recording and EyeTV control and more. Read my previous post here, and visit the Ovolab website for details.

A Smarter, but not the Smartest, Thermostat

One of the most popular projects in Smart Home Hacks, judging from my email, is Hack #41 Control Your Heat Remotely. It describes how to replace your existing HVAC thermostat with one that can be controlled via X10 either locally, or by calling in and issuing touch-tone commands. The latter approach is quite useful if you have a vacation home; you can turn on the heat (or air conditioning) from your cell phone before you arrive so it's nice and cozy when you get there.

About two months ago, when I realized that the thermostat in my home needed to be replaced, I was tempted to buy one of the thermostats that's used in that hack. It's seemingly right up my alley, but I decided to take a different approach. I went with a modern, but non-automatable thermostat. I know, I was surprised by my decision too.

I hope they don't throw me out of the Home Automation Geek Society for this, but here's the deal. An automated thermostat wasn't right for me. Here's why:

My scheduling needs are simple. Somebody is usually at home (both my wife and work at home) so changing the temperature to an "unoccupied" setting doesn't happen too often. Too bad, that's a great way to save money and easily handled by a home automation system, but I don't need that capability.

My home automation setup is volatile. I frequently try out new devices and home automation software so my system is in a lot of flux, and sometimes not working at all. I was nervous about maintaining reliable HVAC control in this kind of environment and didn't want to put my system's S.A.F. rating at risk. (That's Spousal Approval Factor; a key element for success.)

I didn't have time. While the winter thus far in Chicago has been mild (at least for Chicago), it has revealed a bad flaw in our home's HVAC system. And I needed a replacement that I could install quickly. We're at home a lot, remember, and cold fingers makes for slow typing.

What was wrong with our old thermostat, you ask? It actually worked fine but was installed in a horribly inefficient location. It took me months to figure this out, but I think there were a couple of factors that hid the problem.

We moved in last Spring, and a lack of cooling is much harder to identify than a lack of proper heating. When our air conditioning ran constantly we were willing to chalk it up to those infamous hot-n-humid midwestern summers. Also, since we live in what used to be an old factory, we expected some air circulation issues. So, we assumed, that while we might have an underpowered air conditioner, it was more likely just the way things were.

But two things happened in the intervening months that caused me to suspect that there was something wrong. First, the weather got cold and our discomfort was more frequent, and more importantly, we renovated our kitchen and added an eat-in dining area. This meant we were spending significantly more time in that part of the house. And whenever we had the kitchen lights on, it got cold.

The kitchen? The lights on?! What in the world? Well, it turns out that the thermostat is mounted directly above the dimmer switch for the kitchen lights. Dimmers work by constricting the flow of current to the lights and the excess energy is released as heat. Which is a problem when the thermostat is just an inch above the switch. The heat from the dimmer rises and makes the thermostat think the room is 10 or 12 degree warmer than it really is. Yikes! 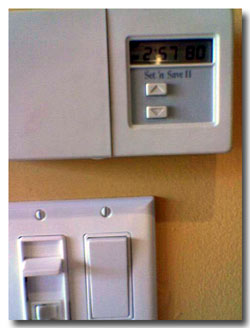 Here's a picture of the old thermostat. If you put your fingers on the wall just above the switch you could actually feel the heat. If you look closely, you'll see the thermostat reads 80 degrees Fahrenheit. Actual room temperature at the time was 68F.

So, to jump to the happy ending, I decided to replace the old-school thermostat with a Venstar Wireless Thermostat System. The primary reason for selecting this model is that the wall-mounted portion is only a signal transceiver, the thermometer is in a battery-powered remote control that you can move from room to room. Now the hot wall doesn't interfere at all, and we've gained the advantage of taking the remote unit with us as we move about the house. This means that the HVAC system is responding to the temperature of the room where we are, not some fixed point in the house. A very nice solution for open-loft living. It's especially nice at night when the temperature in the bedroom is the only area we care about. Also nice is the ability to turn up the heat a bit just after waking up, and before leaving the comfort of bed.

Installing the new system was easy, it was a wire-for-wire replacement with my old unit. (The only stumbling block was the funky wiring terminals; if you get one of these remember that you connect the wires to the side of the terminals, not the tops.) I sometimes wish that the remote unit were more fashionably designed, it's a square box about the size of a dish sponge, but on the other hand it is easy to find when you want to adjust the settings.

So, I'm a happy (and warmer) camper, and it's not a very fancy solution, so perhaps there is a lesson for me in all this. However, that won't stop me from coveting this thermostat, with a built-in web server, I just can't help myself. Maybe next time.

If you're a GTD devotee, or just a regular user of a pocket briefcase (as I am) or a Hipster PDA, then you'll dig this recent discovery. Mead makes a half-sized index card. They're 3 x 2.5 inches (7.6 x 6.3 cm) and I'm finding them quite handy. They're easy to carry, and perfect for a short note. They also fit quite well in a regular wallet; right up next to your credit card and bus pass. A packet of 200 is cheap at Office Depot, but despite my best search-fu efforts, I can't find them listed on any shopping site. But, they do exist, so go forth and seek.

A couple of weeks ago I was browsing the bookstore at San Francisco International Airport (a suprisingly good bookstore, by the way) and discovered a really neat book. It's about how our brains work, and how our sense of self, or "the mind" is created; a fascinating study of both biology and philosophy. Here's part of the blurb from the back cover:


"How does the three pounds of electric sponge stowed in the top of your head allow you to experience enchantment in front of an evening landscape, and them make you remember the shopping, say "Damn!" and head off to the supermarket?"

The name of the book is Introducing Mind and Brain and I found that it is part of series, published in the UK, that tackles heady subjects by combining authoritative text with delightful, and intelligent, graphic design. It's a case study in the old adage "a picture is worth a thousand words" and the sort of book that's fun to show to others, and of course to enjoy yourself. I really dug this one, and now I'm trying to decide which of the many topics I'll try next: quantum physics, marxism, time, ethics, Foucault, or one of the others. (See the link for a list of more titles.)