Insteon automation with your Mac

If you're a Mac user, and into home automation, check out the arrival of INSTEON support in Indigo. Finally, the Rest of Us can have the latest technology. Thanks, Perceptive Automation!

Over the holiday I had the "pleasure" of visiting Denver's Colorado Mills mall on the busiest shopping day of the year. It's a very nice mall, but perhaps the most lasting impression that I left with was the Mac OS X-based photo software used by Santa's elves at the obligatory North Pole annex. It's called Teps-X. In all my years with the Mac, it's an app that I've never encountered before, what a nice surprise.

A nice surprise showed up in my real-world mailbox today, a copy of Smart Home Hacks en Español. It's a kick to see the book in another language, especially to read the jokes and cultural references to things like George Jetson. The Spanish translation of the title is Domòtica: Los Mejores Trucos, which according to Babelfish, means "Home Automation: The Best Tricks." (I guess "hacks" doesn't really translate that well.) If you're so inclined, order a copy from Amazon. If you don't speak Spanish, perhaps you can compare it side-by-side with the English version and learn a new language, that's what I intend to do!

Shopping for a digital television is not my idea of fun. All the acronyms, "standards", and decisions are just plain overwhelming and the whole arena is a confusing mess. (However, it is humbling, because it reminds me how others must feel when shopping for a computer.)

Thankfully, TidBITS publishing has just released a new electronic book on the subject: Take Control of Digital TV by Clark Humphrey. Like all the books in the Take Control series, it's written in plain English and is genuinely helpful. It covers the technology itself (and why you should, or shouldn't, care), how to pick the right-sized TV for your room, and how to make sense of the obtuse instructions in the set-up and configuration manuals you'll face after you've made your purchase. After reading the 72 page book I'm feeling very much at ease, and when's the last time you said that about a technical reference? Check out the free excerpt at the site for a taste of your own.

The Mexican Fine Arts Museum, in the Pilsen neighborhood of Chicago, is currently exhibiting "The Journey Home" -- a collection of amazing Day of the Dead artwork and altars. The show runs through December 11, 2005.

The exhibit is extremely well done, the artwork touching, impressive, and shocking, and even though I've studied Dia de los Muertos before, I still learned quite a bit. Some of the work is quite traditional, down to the loaves of bread, but a few pieces reflect a more modern expression of the holiday. 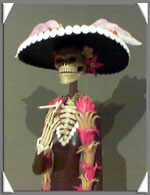 All of them bring forth questions about your own mortality and what sort of artifacts and anecdotes your friends and family would choose to memorialize you. (I'm hoping my wife can find an old Atari ST for my graveside.)

As a bonus, the center's gift shop has quite a collection of Day of the Dead artwork for your consuming pleasure. Admission to the show is free, so grab some souvenirs or drop a few bucks in the donation box, eh?

Do you admit to believing in ghosts?

An interesting story I ran across recently, quoted below:

Can you hear me now?

If you have poor cell phone reception inside your home (which is very common), and you have a PCS phone, this Cell Phone Signal Booster might be of interest. Particularly if you're one of those cutting-edge types who have jettisoned your land-line and use your cell as your only telephone.

It's a pity it won't help with GSM phones, which I have and find more susceptible to indoor reception problems, but at least it might help some of you. In other words, I haven't tried it, but if the price is right and you give it a whirl, please let me know what you think.

The power of a single letter

An article in today's Chicago Tribune discusses author Craig Conley and his new book One-Letter Words: A Dictionary. If you're a writer, editor, or just a person who enjoys finding overlooked beauty in the everyday world, this book will surprise and delight you.

Craig's a smart writer, a talented performer, and a friend. Check out his website for some other neat books that he's written, and an eclectic collection of links to little-known (and fascinating) reference sites on the web.